Season of the Seraph

From Destiny 2 Wiki
(Redirected from Season 19)
Jump to: navigation, search 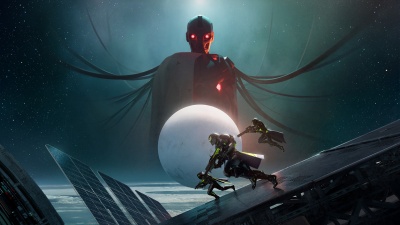 The Infiltrator, the War God, and the Machine

The Hive God of War moves to seize control of Rasputin’s network of weaponized satellites. In her hands, she would turn its devastating power on the Last City. To stop her, the Vanguard has authorized special covert operations armed with the Warmind’s most advanced weaponry. Agents conducting these operations are known as Seraphs.[1]

Google Stadia will shut down on January 18, 2023.[2] Destiny 2 players on Stadia should set up Cross Save before this date in order to preserve access to their accounts, and allow them to use their characters and items on other linked platforms. For more information, see Bungie's Save Your Stadia Characters article.[3]

Crucible playlists have been reworked. They now consist of Team Quickplay, which includes Control and Clash; a 6v6/free-for-all playlist that rotates its game mode each week; Competitive, which replaces the Glory rank playlist; and Crucible Labs, which will feature experimental game modes. When Trials of Osiris is active, it will temporarily replace Crucible Labs. When Iron Banner is active, it will replace Team Quickplay. The Competitive playlist uses a new Competitive Division ranking ladder, replacing the Glory system that was used previously. A new Crucible Triumph seal and title has been added, replacing the Unbroken title and seal. Crucible Gear engram focusing has also been added to Lord Shaxx.

A full-auto toggle has been added to the Gameplay section of the Settings menu, which causes all weapons to fire fully automatic when holding down the Fire button/key. The Full Auto Trigger System perk has been replaced on several Exotic weapons as a result. The Full Auto Retrofit mod is still available.

Legendary weapons that drop from the Deep Stone Crypt raid have been updated with new perk pools, and can now be crafted. They will also drop with a new Origin Trait. Players can purchase a Deepsight Resonance weapon from the Cache of the Crypt once per week.[4]

A catalyst for Cloudstrike has been added. It can drop from strikes, Crucible, and Gambit.

Dares of Eternity bounties from Xûr and Starhorse now reward Strange Favor reputation. The amount of reputation earned from Legend difficulty has been increased. The Year 3 weapons and old armor sets from the rotating loot pool have been removed. Year 4 weapons and armor sets, as well as Tangled Shore armor sets, have been added to replace them.

All Destination Materials can no longer be obtained as inventory items, with resource nodes giving only Glimmer and Experience when harvested. These items have been deprecated, and all vendor costs that required them have been replaced. They can only be sold to Master Rahool for Glimmer. Players are also now able to exchange Dark Fragments, Phantasmal Fragments, and Herealways Pieces with Rahool for Glimmer.

Devrim Kay and Failsafe have had their reputation systems removed. They will now directly sell their respective armor sets, as well as any Ghost Shells or Emblems that would have been earned by ranking up with them. The sunset weapons that they previously sold or offered as rewards can no longer be obtained.

Glimmer rewarded from Public Events has been increased.

Assassin's Creed-themed items can now be purchased on the Eververse store for Silver, as a result of a collaboration between Bungie and Ubisoft. This includes an armor ornament set for each class, a Ship, a Sparrow, a Ghost Shell, and Finishers. Destiny 2-themed items have also been added to Assassin's Creed Valhalla.[3][5]

The Seasonal Artifact is the Seraph Cipher, which provides Seasonal Mods and additional Power. The Exo Frame is the seasonal vendor, located in the H.E.L.M.

The IKELOS weapons have returned with new perk pools, and can now be crafted. They can be obtained from Warmind Nodes, which can be found using the Resonance Amp.

A new dungeon, Spire of the Watcher, will be released on December 9, 2022. It requires ownership of The Witch Queen Dungeon Key to access.[6]