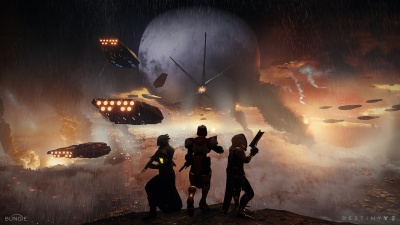 The Red War is the first Season in Destiny 2.

Humanity's last safe city has fallen to an overwhelming invasion force, led by Ghaul, the imposing commander of the brutal Red Legion. He has stripped the city's Guardians of their power, and forced the survivors to flee. You will venture to mysterious, unexplored worlds of our solar system to discover an arsenal of weapons and devastating new combat abilities. To defeat the Red Legion and confront Ghaul, you must reunite humanity's scattered heroes, stand together, and fight back to reclaim our home.

Destiny's Defender, Sunsinger and Bladedancer subclasses have been replaced with Sentinel, Dawnblade, and Arcstrider respectively. Each class gets their own class ability: Titans deploy barricades which block damage from both sides, Warlocks can place a healing or empowering rift, and Hunters dodge.

Primary, Special, and Heavy weapons are now categorized as Kinetic, Energy and Power. Primary and some Special weapons are now Kinetic if they deal no elemental damage, and Energy if they deal Arc, Solar or Void damage. Artifacts have been removed, their slot is taken by Clan Banners. Discipline, Intellect and Strength stats have been replaced with Mobility, Recovery and Resilience.

Trials of Osiris have been replaced with Trials of the Nine.

The Red War contains a story campaign, which automatically begins after character creation and is mandatory to access the game, 4 new destinations, 6 strikes and a raid.

The original Tower has been replaced with two social spaces: The Farm and the new Tower. New destinations include the European Dead Zone which contains the Arms Dealer and the Lake of Shadows strikes, Titan with the Savathûn's Song strike, Nessus with Exodus Crash and the Inverted Spire, and Io with the Pyramidion strike.

The Leviathan raid, located in Nessus Orbit, became available one week after the game's release.