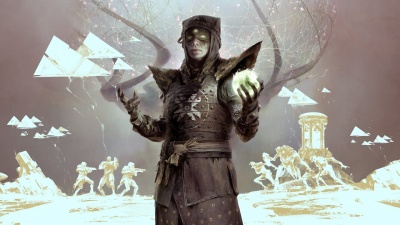 Season of Arrivals is the 11th Season in Destiny 2.

Fragments of the vanquished Almighty burn in the sky, but celebration is cut short as mysterious Pyramid ships reveal themselves throughout the system. An obscured message emerges from the darkness. Is it a greeting, a threat, or something else altogether? Eris and Zavala call upon you to find out...

Lake of Shadows, The Corrupted, and The Festering Core strikes are added to Nightfall: the Ordeal. They feature Taken Champions.

Season of the Undying and Season of Dawn Season Pass and Exotic quest weapons can be acquired from Master Rahool, and related quests have been removed. Each costs an Exotic Cipher,

100,000, 200 planetary resources and 3 Enhancement Prisms. Exotic Ciphers can also be used to buy an additional Exotic Engram from Xûr.

Ranking up the Season Pass no longer fills the player character's Super meter.

Arrivals Seasonal Artifact is the Seed of Silver Wings.

This season brings the Contact Public Event, the Interference weekly mission and a special Umbral Engram. These Engrams can be Focused on a certain theme to reduce its possible drop options, which allows players to easier farm for a certain type of gear with desired stats or perks.

Season of Arrivals also introduces the Prophecy dungeon, which can be launched from the Tower map. Its mechanics revolve around light and dark, and change of perspective.