The Wardcliff Coil is an Exotic Rocket Launcher.

Wardcliff Coil Catalyst can be obtained by completing Heroic or Nightfall Strikes. To unlock its upgrade, the player has to defeat enemies with this weapon.

The Catalyst adds the Pinpoint Guidance Module perk to this weapon and Masterworks it.

HAMIT'S LOG. The lead is good, but so are the Fallen tracking me. I swear on my Ghost there's a hundred camped outside. I'm cornered in the lab and they're using Shanks to run me out of ammunition. War cultist, arm thyself; at least it's a weapons lab. This, er, rustic device was once an experimental axion emitter, which sprays weird particles to light up the basement of the universe. Right here I've coupled the emitter to some catacaustic quark-gluon coils, which will not, due to my scrupulous safety checking, create a strangelet that devours the Earth. I cook up some pain in there, the microverse decays, and the result comes out here. If it doesn't work, well, please name the crater after me. 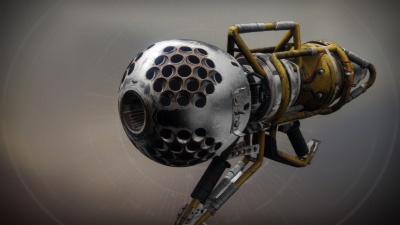 Do Not Sell My Personal Information
Retrieved from "https://d2.destinygamewiki.com/mediawiki/index.php?title=The_Wardcliff_Coil&oldid=70678"
Categories: