Tell me where you are! Account for Earth's rotation—more than 1000 kilometers per hour—your orbital velocity of 107,000 kph, your local stellar drift of 70,000 kph, your galactic orbital velocity of 792,000 kph, and our galactic drift relative to the cosmic microwave background of 1,300,000 kph. Also, account for your motion relative to me due to the accelerating expansion of space-time.

Difficult, isn't it? But with the help of these handsome noetic devices you will find yourself deliciously and maddeningly aware of your ley velocities! Fired from an existence cannon through a whirling void the size of everything!

And like any line of force, these vectors may be tapped, their obscene speeds diverted for your own use, although we recommend swapping them for comfortable boots before you socialize with the Merely Stationary. 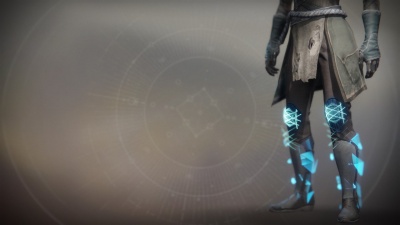 
Do Not Sell My Personal Information
Retrieved from "https://d2.destinygamewiki.com/mediawiki/index.php?title=Transversive_Steps&oldid=102962"
Categories: