Fr0st-EE5 is an Exotic Leg Armor.

"Marcus, these are incredible!"
"What did I tell you? I call these bad boys the Fr0st-EE5."
"Um, come again?"
"Just call them the Frosties."
"Whatever they're called, I love them. It felt like my entire body became supercharged while running."
"Glad you like them. I still have a couple of kinks to work out, but when that's over..."
"A couple of kinks?"
"Well sometimes—and I mean very rarely—the Energy Transfer Capacitors can overheat and explode during the user's sprint. That only happens 2% of the time or something."
"Wait, you sent me on that field test knowing this?"
"I don't see the issue here."
"I'm telling Sloane."
"Whoa, Boaz, let's not get hasty. I'll make it up to you with some sparrow mods."
"You can't buy me off— Wait, which mods are we talking about here?" 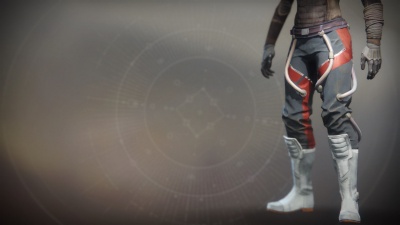 Do Not Sell My Personal Information
Retrieved from "https://d2.destinygamewiki.com/mediawiki/index.php?title=Fr0st-EE5&oldid=66403"
Categories: