Detailed explanation on how to acquire Warmind's Avatar Gauntlets

Caught alone in a tangled web.

Osiris pulls the hood of his oversized cloak forward. Though he hopes to pass through the Botza District unnoticed, the sharp beak protruding from his shadowy hood betrays his disguise. Eliksni passersby stare at him with suspicion.

The erstwhile Warlock slips into a darkened corner of The Ether Tank, where the barroom floor bustles with both Human and Eliksni gamblers, who wager whether the Warmind Rasputin will be restored, and how many civilians it will kill if revived. On the far side of the room, Spider lords over the scene with satisfaction. Osiris watches him, intent on finding a way to discretely question him regarding Neptune. The Eliksni crime boss has cultivated a different set of informants than the Hidden, and Osiris needs intel from the widest net possible.

Suddenly, Osiris feels the hair on the back of his neck stand up. Though he no longer has his Light, centuries of training have left his intuition as sharp as ever. He merges into a crowd of karaoke enthusiasts and surveys the room.

Standing just inside the tavern entrance is another cloaked figure. Though their disguise is far more plausible than his own, Osiris can clearly identify the Praxic Warlock, Aunor Mahal. Osiris curses under his breath.

He retreats through the back entrance into the chill of the night. Osiris feels the darkness close in around him and wonders who among his former allies still trusts him.

Given everything, he wonders whether he should still trust himself. 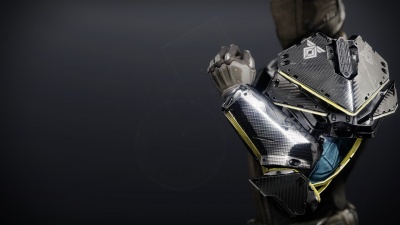