Vex Mythoclast Catalyst is obtained by completing its puzzle in the Vault of Glass raid. Its upgrade is unlocked by defeating enemies with this weapon.

The Catalyst gives Vex Mythoclast the Calculated Balance perk and Masterworks it.

Some legends live forever. Others are overwritten—reshaped by the sheer will of those who believe that any ordeal can be conquered, any foe vanquished, any god cast down.

The Mythoclast is a Vex instrument from some far-flung corner of time and space, mysteriously fit for Human hands. Its origins, mechanism of action, and ultimate purpose remain unknown. Perhaps it will reveal itself to you, in time… 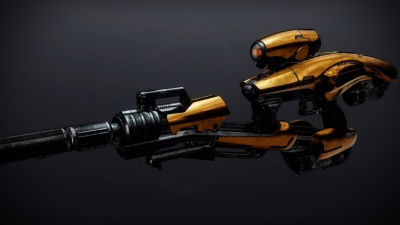