Vault of Glass is a raid from the first Destiny. It can be accessed through the Legends node on the Director.

Find a way to open the Vault of Glass.

The team arrives to the Waking Ruins in front of the closed gate leading into the Vault. To open the gate, players have to capture three sync plates by standing on them, which builds the spire in the middle of the area. There is one plate near the gate and two in front of it and below, one at the left and another to the right. The plates have to be captured simultaneously. A plate is lost and has to be recaptured when a Praetorian Minotaur steps on it.

After the gate opens, the team has to find their way down to the Templar's Well. There are two hidden chests in the area. The first one is right after the gate. The second is on a secret side-path with plants and trees. It can be accessed through a doorway which will be located below the player, in a wall, as they reach what looks like a greenish hallway with no floor.

Do not let the Vex reach the confluxes. 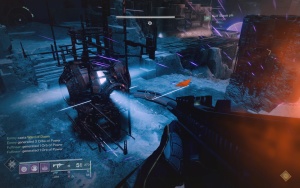 A Conflux.
This and the following two encounters take place in the same area and share the Ritual of Negation mechanic. It is an ability utilized by the Templar, a large Hydra which is immune to all damage during this encounter, but keeps attacking players with its Aeon Maul. When a player receives a debuff called "Marked for Negation", the next Ritual of Negation cast by the Templar will kill them. The debuff can be received by stepping into a pool of radiolarian fluid left behind by Fanatics, and it can be cleansed in the pool of light below the Templar. Once someone cleanses their mark, the pool of light disappears for a while.

The goal of this encounter is to defend the Confluxes from the Vex which will try to sacrifice into them. The first, central Conflux, is below the Raid Banner. After it is successfully defended, it disappears and the players have to survive against waves of Vex. After a while, two Confluxes will appear, one on the left and another on the right. Once they are defended and another wave of enemies is dealt with, the players will have to protect all three Confluxes at the same time.

Overload Minotaurs spawn during this encounter.

During this encounter the team has to destroy the Oracles, glowing objects which spawn with a chime. There are seven spots where they can spawn, one in the middle, three in the leftmost part of the stage, and three in its rightmost part. The Oracles spawn in five waves. The first wave contains three Oracles, the second contains four, the third contains five, the fourth contains six, and the seventh wave spawns all of the Oracles.

The Oracles have to be destroyed in a correct sequence. They display the sequence twice, spawning one after another, immune to damage. Then, they spawn all at once and have to be quickly destroyed. Destroying a wrong Oracle or failing to destroy one marks the whole team for negation.

Defeat the Templar and its legions.

The encounter begins once one player picks up the Aegis, a relic in the center of the stage. Whoever holds the Aegis can use it like a melee weapon, guard with it using the Guard button and cast a projectile with the Super button. The Aegis' Guard and Super abilities need time to charge. If the Aegis is dropped (either by its holder swapping weapons or dying) it has to be picked up again shortly, or it will kill the fireteam.

The Aegis' projectile can remove the Templar's shield, which allows players to deal damage to the boss. When unshielded, the Templar uses a new ability, Force Cage, which detains a random player, preventing them from moving or using any ability or weapon. Other players have to free their detained teammate by shooting the cage, or the caged player will die. The Templar also attempts to teleport throughout the damage phase. If the teleport is successful, the boss restores its shield. The teleport can be blocked by having one player stand in its destination point, which looks like a glowing circle with a beam of light in the middle. Each unsuccessful teleport spawns a group of Minotaurs.

Oracles keep spawning during this encounter, but only in groups of three.

Find a way through the Gorgons' Labyrinth. 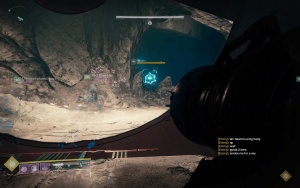 A Gorgon.
The Labyrinth is a large space where the only enemies are Gorgons, boss Harpies which patrol the area. They do not attack players directly. Instead, when a Gorgon spots a Guardian, it casts Gorgon's Gaze on the entire group. The players die once it finishes the cast, unless they kill this Gorgon before it kills them. Gorgons spot players in their line of sight, but they cannot see very far. They might be alerted by sounds of double jumping, sprinting, using weapons or abilities.

After leaving the Labyrinth, the group has to jump across a chasm and reach the Glass Throne. The last hidden chest is located right outside the corridor leading to the Throne proper, on a ledge to the left, near the ceiling.

Protect the timelines and awaken the Glass Throne. 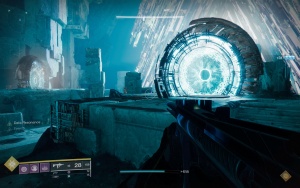 Both portals.
The team will stay in this area for the remainder of the raid. There are two portals with sync plates behind them. The portal to the left leads to a reddish desert version of the Glass Throne. The portal to the right leads to a greenish overgrown version of the Glass Throne. The portals are opened by capturing their respective sync plates. Once a plate is captured, staying on it is not necessary to keep the portal active.

Overload Minotaurs and Gatekeeper Hydras spawn throughout this encounter. Champions disable sync plates by stepping on them, players have to recapture the disabled plate to open its respective portal. Gatekeepers disable both portals with their presence, the portals reactivate after a Gatekeeper is defeated. The first Gatekeeper leaves behind the Aegis.

Players have to defend the Confluxes again. There is one Conflux in each portal, both have to be defended simultaneously. Each wave of Vex marching to a Conflux includes either a Wyvern or a Praetorian Minotaur. The Praetorian is shielded, the shield can be removed only with damage from players who wield the Aegis. Once someone brings the Aegis through a portal, that person receives the Teleport Destabilized debuff which lasts for 45 seconds, and prevents that person from carrying the Aegis through a portal. Another player has to carry the relic outside and give it to another player to carry through the other portal.

After three Praetorians in each portal are defeated, the first two Confluxes will disappear. A new Conflux will spawn in the main area, and the players have to defend it. Once the Wyverns are dealt with, the encounter ends. 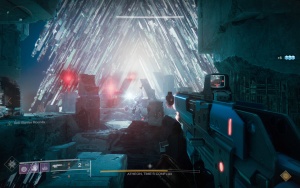 Atheon calls upon the Oracles.

Atheon spawns on the spot where the final Conflux used to be. It does not move too far from that area, and is shielded from all damage. After a while, Atheon opens the timestreams and teleports three random Guardians into one of the portals, with the Aegis right in front of them. Then, Atheon calls upon the Oracles. Their sequence can be seen only from the main room. They can be destroyed only in a portal.

The teleported players have to tell the rest of their team which portal to keep open for them. Every player in a portal is Marked by the Void, which gradually covers their screen in black, preventing them from seeing anything. Someone should pick up the Aegis and use its Guard ability to cleanse themself and nearby players from the mark. The mark is reapplied instantly until the players cleanse in the main area.

Players in the main area have to survive against a swarm of Supplicants, exploding Harpies, open the portal for their teammates, and tell the portal team the correct Oracle sequence. Once three waves with three Oracles in each are destroyed, all players receive the Time's Vengeance buff, which lasts for 30 seconds and allows to damage Atheon. The portal team can come back into the main area for the damage phase.

Atheon uses the Force Cage while it is unshielded. A random player will get the 5 second debuff called Imminent Detain. After it expires, that person and everyone around them are detained and die once the timer runs out. The about to be detained player has to split from the group to let their teammates shoot them out of the cage.


Do Not Sell My Personal Information
Retrieved from "https://d2.destinygamewiki.com/mediawiki/index.php?title=Vault_of_Glass&oldid=96699"
Categories: