From Destiny 2 Wiki
Jump to: navigation, search
Key elements of this article are incomplete. You can help Destiny 2 Wiki by expanding it.

Deep Stone Crypt is a raid added in Beyond Light.

Ride to the Deep Stone Crypt

You start from Eventide Ruins. Summon your fastest Sparrow and follow the path until you are attacked by Fallen. When you clear them out, a nearby door will open. Keep following the path till you reach the bubble in which there are few Pikes. It's best to ignore them since they are pretty slow. Your first task is to survive the cold until reaching the Deep Stone Crypt. As you exit the bubble, a Frostbite debuff will appear on the left side of your screen. If you let it reach x10 you will die. The trick is to move quickly from bubble to bubble until you get to the raid location. It's best to send a few members in a different direction, so you can map out the path to the next bubble before fully committing. Dying will send you to your previous location, so there is no much risk involved. Your path will also be filled with adds that you should clear out. At the last bubble, a Brig will spawn. Kill him to unlock the path forward.

Fuses in the light room.

Throughout the raid, you will have to split your Fireteam into 3 roles: Operator, Scanner, and Suppressor:

The area consists of a light and a dark room, and a basement that runs underneath. In both rooms, there are 3 fuses on the wall and 2 cylinders which you will need to destroy. They are connected to the control panels which are located in the basement. In total, there are 10 panels. You will need to shoot the right ones to trigger the damage phase. The basement will be open before you start the encounter, so it's best to explore it and figure out how panels, cylinders, and fuses are connected.

First, split the team into 2, as the doors will get shut once you start the encounter. To start the encounter, use the nearby Augmentation Terminal, which will give you the Operator buff. There is a total of 3 terminals, 1 in each room and 1 in the basement. You will use them to deposit and send Operator and a Scanner buffs to the other members of your Fireteam. Dregs, Vandals and other ads will start spawning, and soon you will find an enemy with a yellow symbol above him. Killing him will drop a Scanner buff, which should be picked by a player without the Operator buff. With it, the Scanner will see that some control panels are highlighted. These are the panels that the Operator has to shoot to access the locked rooms. The Scanner has to guide him to the middle room on top of the map, which will give the Operator access to the basement area. Only 1 operator can go in at a time. The Scanner has to go to the cylinders which stand on see-through floors and tell which panels are glowing below. The Operator has to shoot 2 panels on the right, and 2 on the dark side to trigger the damage phase. If he hits the wrong one, he will die. After that is done, the Operator will have to switch to the Scanner buff via the Augmentation terminal. In the basement, he will see a miniature of the fuses, which show the correct order in which the team above has to shoot them. There are 3 fuses per room, and you have to destroy at least 2. Repeat the process 3 times to finish the encounter.

So, the challenge is in switching the Scanner buff between the Light and Dark rooms to guide the Operator, while also taking care of the Fallen. This gets a bit complicated, as Sentinel Servitors will spawn throughout the fight, which will turn off the terminal. You will have to kill them asap, as the damage phase is time-based. Also, keep an eye out for Dark Guard Captains and exploding Shanks, as they can deal big damage.

It's recommended that all members of the team have Overload runs unlocked. To kill Servitors quickly, use swords. Having Dawnblade in your team is useful, as Well of Radiance will protect you while also improving your attack damage. 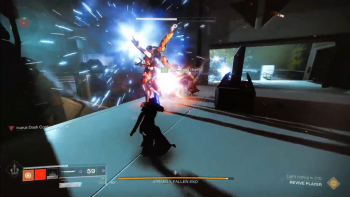 This area consists of 2 rooms: a ground room on Europa, and a bigger one on the Morning Star space station. To access it, you have to take one of the 4 rocket pods. Both rooms can be split into 3 rows, each of which has an Augmentation Terminal.

Atraks-1 will clone herself at the beginning of the encounter, with 8 duplicates spread through the rooms. Adds will start spawning, so clear out incoming Wretches and Tracer Shanks till the wave of Servitors spawns. With them, there will be a Vandal with Operator buff in the ground room, and another with Scanner in space. You will use these buffs to destroy the copies of the boss.

Kill all 6 Servitors to unlock the terminals. Eliminating them will make duplicates cast Replicated Ruin, the wipe mechanic. When that happens, a Scanner will see that one clone is glowing. The space team has to focus on attacking her, as this will interrupt the attack and damage the boss. At one point she will disappear, but don't stop shooting. Now, the same wipe mechanic will start at the bottom, so the Scanner will have to transfer the buff down. At the same time, the player with the Operator buff should send it upstairs. From this point onward, only the Scanner buff needs to be passed.

Dead clones will leave an Atraks-1 Replication debuff which you have to take. Picking it up triggers a 45-second timer. You don't want to let it hit 0, as that will fail the encounter. The timer is reset each time the Operator shoots you. That will also drop the debuff, so you have to pick it up again. The goal is to eject all debuffs into space via 4 airlocks. To open them, the Operator has to shoot appropriate panels. The airlock will be open for a short amount of time, in which:

This step is repeated until you kill 4 replications. Then, adds will start spawning again and the whole thing starts over. Atraks will enrage after the 3rd cycle, which will wipe you out, so you have to clear out her first health bar before that happens.

Dropping her HP to 1/4 will enrage Atraks-1 and start the second phase. Here, the ground team has to join the one in space. The scanner has to identify the glowing clone once again. Shoot them in the order until all of them are destroyed.

The trick is in constantly switching the Scanner buff between space and ground team. The Scanner on the ground should place themself in a spot where it is easier to spot a glowing replication. It takes 20 seconds to travel to the space station, so move quickly once you get the debuff.

An Arc Resistance armor Mod will help minimize the damage from the replications, while Riskrunner will easily clear adds. For taking care of Servitors, The Lament and Falling Guillotine work wonders. To deal maximum damage to the replications, use weapons with burst damage, like The Fourth Horseman. Nova Bomb is also pretty powerful in this scenario. 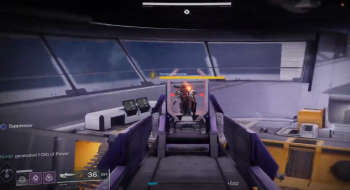 Taniks will glow blue if the Suppressor is in the proper spot.

This encounter uses all 3 roles: Operator, Suppressor, and Scanner. The Suppressor's role is to stand below the security drones and shoot Taniks. Do this 3 times and you will stun him, which will also unlock the nearby bins. Your teammates will have to use them to safely dispose of nuclear cores. Stunning him also disables the augment of a random player. If that happens, they have to use the Augmentation Terminal to pass it to another member of the Fireteam. Two members should carry the cores, while others have to protect them as they can only jump and move around. The Operator has to work in tandem with the "core runner" while the Scanner tells them which bin they should use for the core. There are 4 bins in the middle and only 2 will be glowing. Each bin has to have the same amount of cores, which you can check on the progress bar beneath. The nuclear core will affect the carrier with radiation debuff that stacks. If it gets to 10, the carrier will die, so move fast. The radiation stack will decay, but somewhat slowly. It is possible to take the core from a player, by holding the interaction button on them.

At the start of the encounter, buffed Vandals will spawn randomly. Kill them and take the appropriate role. The Scanner needs to immediately communicate which bins to use, while the Operator shoots one of the keypads next to the core station. This will lower the number of nuclear cores to just 2, making the whole task possible.

Repeating this process 5 times will end the encounter and unlock the hatch in the middle. Taniks will start to chase you in the end, so be careful. The hatch leads to the safe room, but its doors begin to close so the fireteam should make haste.

Throughout the encounter, you will deal mainly with adds, so use shotguns and items that generate Warmind Cells.

Nuclear cores can be transferred between teammates. 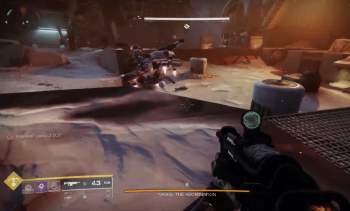 The last encounter consists of 3 sections: blue, orange, and the one you spawn in. Each of them has one Augmentation Terminal and 2 bins.

The final encounter uses the same mechanics, but on a bigger map. To start it, go towards the debris in the center. Focus on eliminating adds until buffed Vandals spawn in each section. The Operator buff is at spawn, Suppressor at orange section, and Scanner at blue. In one moment, Taniks will go to one of these sections and start a series of aerial attacks. They will be marked with purple columns and are easy to avoid. Taniks has 4 thrusters that you need to shoot. First, attack the front ones until each drops a nuclear core. The next part is the same as in the last encounter. 2 runners have to drop the cores into bins while Scanner guides them. To avoid confusion, they should call out their bin beforehand.

Again, each runner is severely limited, so they need to be covered at all times. There's also a red sphere that can lock the runners in place. If that happens, only the Operator have to shoot the nodes in the sphere to set the runner free. Once the runner gets 7 stacks of the debuff, transfer the core to your backup. The Suppressor's role is to unlock the bins so that the runners can dispose of their core. To do this, they have to locate and stand under 3 white spheres while shooting at Taniks to stun him. Repeat this 2 times and it's time to deal some damage.

In the damage phase, Taniks will go back to the center and surround himself in a bubble. To hurt him, you will have to go inside. The problem is, his bubble is surrounded by debris. You will need to avoid it, as it causes instant death. To cause the most damage, use weapons based on DPS. If you have a Titan, now it's time to place a Ward of Dawn just next to the bubble. Taniks will enrage after 3 phases, so you need to kill him quickly.

When you get close to the end of the fight, Taniks will use teleport 3 times and attack with aerial attacks. Lastly, he will cast a wipe. This is the moment you want to drop some burst damage with Golden Guns, Nova Bombs, etc. Divinity is pretty useful throughout the fight, as it is also very useful for freeing core runners. Just keep attacking and you will soon complete this raid.


Do Not Sell My Personal Information
Retrieved from "https://d2.destinygamewiki.com/mediawiki/index.php?title=Deep_Stone_Crypt&oldid=88833"
Categories: