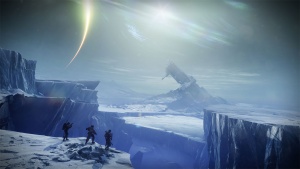 A desolate and frozen moon, testament to humanity's ambition and hubris.

Rathmore Chaos, Europa is a destination introduced in Beyond Light. It is inhabited by the Fallen and the Vex.

Europa can be accessed by all players who complete the Darkness's Doorstep mission from the Beyond Light campaign. It is available even without owning the expansion.

It has three landing zones: one on the south, in Beyond, another in the next area to the north of it, Charon's Crossing. The third landing zone is in Eventide Ruins, it is available to players who have completed the Beyond Light campaign. There are three main zones: Cadmus Ridge which leads to Bray Exoscience and its subzones, Eventide Ruins which lead to Riis-Reborn Approach and its subzones, and Asterion Abyss which leads to Nexus and Well of Infinitude. The campsite in Beyond allows players to store certain trophies obtained by completing specific Europa Triumphs. The Exo Stranger stays near the campsite, she handles the Stasis quests. Variks the Loyal resides in Charon's Crossing, he is the main vendor of this destination.

Europa has a special dynamic weather system responsible for snowstorms. There are basically three weather modes. The first one has no storm at all, with clear skies and full visibility. The second is a light storm, the snowfall obscures the sky and the wind picks up. The third mode is a heavy storm, snowfall significantly reduces visibility and the wind is strong enough to slightly move players. Weapons perks that highlight enemies do work well during a snowstorm.

With the release of Deep Stone Crypt one of the main zones on Europa becomes the Eclipsed Zone, they rotate weekly. The Eclipsed Zone is marked on the map, and while the player is in that location, their Stasis abilities recharge faster. Heroic Patrols can be found only in the Eclipsed Zone.

Europa's and Cosmodrome's Lost Sectors have two additional difficulties: Legend and Master. These are launched from a beacon near the Sector's entrance, but have to be unlocked by completing the ordinary version first. There is a specific order in which each of the Sectors becomes Legend or Master. Completing them solo has a chance of dropping certain pieces of Exotic armor.

A single patrol in the Eclipsed Zone becomes Heroic. It is denoted by a brown icon. They always task the player with defeating a group of enemies with a boss at the end.

Completing the Beyond Light storyline and certain Variks' Sabotage quests allows players to load into Empire Hunts on one of the four available difficulty levels. One of Variks' quests also unlocks the Exo Challenges. There are three challenges, they change weekly, and after the first one is completed they can be launched directly from the map.

Certain Europan missions can be replayed by interacting with beacons in Charon's Crossing.

The destination's High-Value Target is an Enforcer Brig, which can be found in one of the three main zones. It is a powerful enemy which spawns a chest when defeated.

When a snowstorm begins in Asterion Abyss, a message saying "The Vex are responding to a strange signal..." appears. Locating and defeating the powerful Wyvern protected by a group of Goblins in the northern part of the area will give the player the Strange Signal buff. A friendly Harpy spawns in the Nexus, with either a shard of Darkness or a tree of Light by its side. Interacting with them initiates a Test of Darkness or a Test of Light, depending on the object. The Test consists of destroying Vex on shifting platforms above the abyss, and to pass it the player has to defeat the Monitor Hydra, which spawns a chest.

When a snowstorm begins in Eventide Ruins, a message saying "Nearby, a powerful enemy waits out the storm..." appears. This time, the player has to locate the powerful Technorunner Captain, which spawns in a building in the eastern part of the area. Defeating it grants the Riis-Reborn Key Codes buff, which allows the player to Drink Inert Radiolarian Fluid by interacting with a terminal in the main section of Riis-Reborn Approach, near the chamber with the shard of the Pyramid. Doing that displays a message saying "The radiolaria resonates within you..." and gives the Signal buff for one of Europa's sectors. There is a Vex Conflux hidden in that sector, it can spawn in several different places, interacting with it while holding the buff teleports the player above the area where they need to complete a short puzzle. The player has two minutes for the puzzle, tracked by the Radiolarian Monitoring buff. There are series of platforms with circular plates and faintly glowing pyramids around them. Stepping on a plate displays the "Emote Data Required" message. Performing any emote on the plate lights up one of the pyramids around it, indicating the direction of the next platform in the sequence. Emoting for the first time also spawns Vex boxes which fire lasers. Performing the sequence correctly spawns a chest.

Some Fallen loot caches, Smuggler's Chests, can be opened only when the player interacts with the Fallen terminals in the area. Some give the incomplete Data Key buff, which expires after 30 seconds and has to be stacked three times to open the chest near one of the terminals. Some give a buff with a vague message describing where the chest is located, the player simply has to locate it to receive their loot.

In addition to ordinary reward or destination chests players can also encounter Stasis-sealed chests. They can be opened only when the player has a specific Stasis attunement, these are obtained during the Beyond Light campaign. Opening them is required for Variks' Europa armor quests.

There are several collectible items which unlock pages from their respective lore books. Nine Entropic Shards, small Pyramid scales, can be destroyed only with the Salvation's Grip Grenade Launcher, each piece unlocks entries from Regarding Stasis. Scanning each of the nine dead Exos unlocks entries from Legacy's Lament, the first three can be scanned during the Lost Lament quest. Bringing nine penguin toys found across Europa to Charon's Crossing unlocks entries from Your Friend, Micah Abram. One penguin is added into the game each week.

After completing the Beyond Light campaign, players can buy a BrayTech Transponder from Variks the Loyal, he sells one each week. Activating it spawns a powerful Techno Squad Leader Marauder in the Eclipsed Zone, which drops the Scanner augment when defeated. Interacting with it gives the player three stacks of the Scanner buff which specifies a certain sector. The augment can be picked up only with the active Transponder, and the buff it gives disappears from fast travel. The player has to carry this buff to the sector it mentions, locate a flock of scanner drones and destroy them in correct order indicated by the yellow highlight. Destroying all allows the player to hack a terminal nearby and removes a stack of the Scanner buff. Doing the same for the remaining two stacks gives the player a reward and an Augment Triumph, which unlocks an entry from the Bray Lab Records - CONFIDENTIAL lore book.


Do Not Sell My Personal Information
Retrieved from "https://d2.destinygamewiki.com/mediawiki/index.php?title=Europa&oldid=93796"
Category: