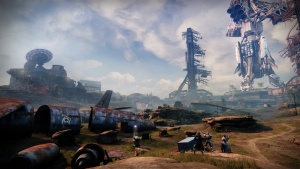 A derelict spaceflight complex in the ruins of Old Russia.

The Cosmodrome is a destination originally introduced in Destiny, and returned in Beyond Light. It is inhabited by the Fallen and the Hive.

The Cosmodrome is the starting area for new players, and the majority of the New Light campaign takes place on this destination.

There are two landing zones in the Cosmodrome. One of them is located in the Steppes, right by the location's only vendor, Shaw Han. The other landing zone is at the north of the map, in the Skywatch. The Mothyards area is located between them, and the Forgotten Shore can be reached from the Skywatch.

Cosmodrome's resource are Spinmetal Leaves, they can be harvested from red canisters they grow on.

A cave in Skywatch contains a charred pile which says "A million deaths are not enough for Master Rahool" if disturbed by the player. This is carried over from the first game, where this place was known as the "Loot Cave" because of high enemy spawn rate, which allowed players to farm Engrams endlessly. This exploit was patched, and the pile of remains along with the message were added as an easter egg.