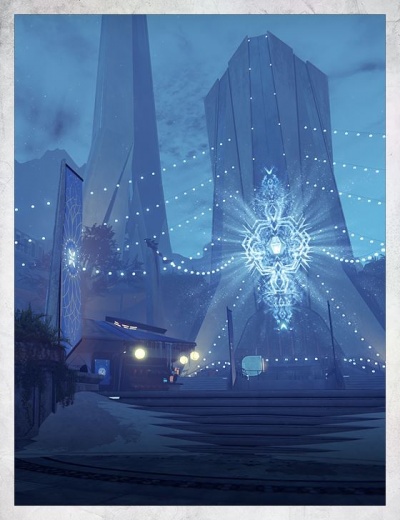 The Dawning
The Dawning is a Live Event in Destiny 2.

The Dawning is a winter celebration that begins in December and ends in January. During this time Eva Levante is back in the Tower to offer the players seasonal quest and bounties.

During this event, the players receive Eva's Holiday Oven, which is used to bake cookies that can be given to various characters in exchange for a gift. Cookie ingredients are obtained by defeating certain enemies in specific ways and completing activities.

While this event is active the players can pick up lanterns (big shiny balls) to run around with, or make snowballs to throw at other players. Both can be obtained and used only in the Tower.

The first Dawning in Destiny 2 took place in December 2017. During this event the players made gifts for characters instead of baking cookies. To make a gift, the player had to obtain a Schematic from a pile of presents next to Ikora Rey in the Tower, then complete a specific objective. Turning in the gifts would reward the player with A Gift in Return.

While this first Dawning was active, snowballs could be found in strikes and patrol zones.

The rest of the cookie recipes are undiscovered until the player bakes these cookies. Baking something that is not on the recipe list, either discovered or not, will produce Burnt Edge Transits, which can be given to Master Rahool. Baking all of the cookies at least once will unlock the Masterwork for the Holiday Oven, which reduces the amount of Essence of Dawning needed to bake each cookie from 15 to 10.

The cookies are baked using special materials which can be obtained only during the Dawning by defeating certain enemies in specific ways. In 2018, the recipes required a certain amount of ingredients. In 2019, the player just needs one of each to bake a cookie, with the exception of the Essence of Dawning.


Do Not Sell My Personal Information
Retrieved from "https://d2.destinygamewiki.com/mediawiki/index.php?title=The_Dawning&oldid=88455"
Category: