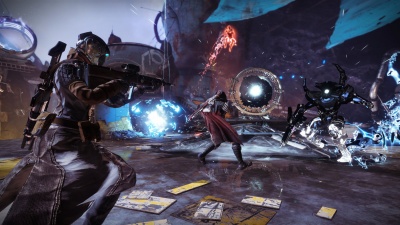 Gambit is a game mode added in Season of the Outlaw. Two teams of four players will each have to summon and defeat the Primeval boss faster than their opponents. The Drifter hands out Gambit bounties and quests. Players on PS4 and PS5 require a PlayStation Plus subscription to access Gambit.

The teams gather on the Derelict with the Drifter as the incoming enemy faction is determined. Each team arrives into a different instance of the same map. There is a bank device in the center of the map, and non-Guardian enemies arrive to designated zones to the left, right, or in front of the bank. The Drifter announces in which zone these enemies appear, and after most of them are defeated, they spawn in the next one. There are portals connecting two farthest zones.

Each defeated enemy drops a Mote of Dark that can be collected by running over it, higher tier enemies drop more motes. Shiny and High Value Targets carry extra motes, the latter are harder to kill. Each player can carry up to 15 motes, player death would cause their carried motes to disappear entirely. Motes flicker and disappear if they stay on the ground for too long.

Players deposit motes at the bank's four synthesizers. Banking will deposit all motes, depositing a certain amount of motes at the same time summons a blocker. Blockers come in three varieties, depending on the minimum amount of motes deposited: Taken Goblin for 5 motes, Taken Phalanx for 10 motes, and Taken Knight for 15 motes. They are sent to the opposing team's map at their bank, locking down the bank while they remain on the field. Blockers can be deployed even if the deposit exceeds bank capacity. If there are two or more blockers at the opposing team's bank, they begin to drain motes from it. Drained motes are added to the bank from which these blockers were sent.

When a team reaches 25, 50 and 75 motes banked, the invasion portal near their bank will open. A single player can enter the portal and arrive at the opposing team's map. This invader can track the opponents' health and the amount of motes they carry, non-Guardian enemies are not hostile to them, and the invader has an overshield while glowing bright red. The invader has 30 seconds to defeat as many Guardians as they can before they are dragged back to their map. Killing four Guardians or dying will also drag back the invader.

While the Primeval is alive, the opposing team's invasion portal activates more frequently with a 20 seconds cooldown in-between activations. If a member of a team with a Primeval is killed by an invader, the Primeval restores some amount of health.

Destroying the Primeval wins the match.