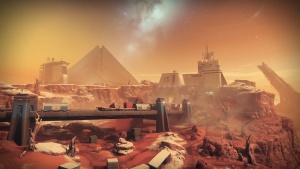 Home to the BrayTech Futurescape and Rasputin. Overrun by the Hive.

Hellas Basin, Mars is a destination introduced in Warmind. It is inhabited by the Cabal and the Hive.

Hellas Basin has two main zones. BrayTech Futurescape is the northern area with a landing zone, it contains a large facility with multiple entrances. Some of those lead into rooms which contain only enemies, one takes the player into a Lost Sector, and the main entrance leads into a safe place with a vendor and a path into Aurora Reach, which leads further into the Mindlab: Rasputin. The path to the left when facing that building leads to the Dynamo Approach. It connects to the Alton Dynamo facility, which contains the Hellas View zone, accessible only during the Will of the Thousands mission and strike.

Glacial Drift is the second area with a landing zone, located to the south of BrayTech Futurescape and connected to it by the road in the eastern part of the destination. Aside from the road, Glacial Drift has two paths. The western one leads to the Dynamo Approach and its subzones, the southern one takes the player through the caves into Olympus Descent, which contain the Penumbral Depths zone, accessible only during the Strange Terrain mission and strike.

Some activities in Hellas Basin allow players to use the Valkyrie javelin. It is a temporary weapon, similar to a Hive Cleaver, which can be thrown with Light Attack and smashed into the ground, dealing damage around its wielder, with Heavy Attack. The Valkyrie spawns in the Will of the Thousands strike, the Escalation Protocol (with an Armory Code) and Warsat Down Public Events.

Ana Bray is the vendor of this destination, she stays in BrayTech Futurescape and offers quests, bounties, and accepts Seraphite, Mars' resource, in exchange for Cradle Engrams.

The Strange Terrain and Will of the Thousands strikes can be accessed from Mars' map.

By doing activities and looting chests on Mars, players can find Rasputin Armory Codes, consumable items which allow players to spawn the Valkyrie javelin during the Escalation Protocol.

The Nascent Dawn 1/5 quest introduces the player to Sleeper Nodes. They are rombus-shaped floating objects hidden all around Hellas Basin, which can contain Rare and Legendary gear, Mars shaders, G-693 Orchestral Maneuver Sparrow and Alpha Umi Ship. They also can rarely give a BrayTech Schematic, which is exchanged with Ana for a Warmind Engram. Sleeper Nodes can be opened with Override Frequencies, they are created by combining 4 Resonate Stems obtained from patrols and public events. Each one can open only a specific Sleeper Node, its location is hinted at in the Frequency's description. The Node opens up slightly, revealing an orange glow and playing music which can be heard when the player with the corresponding Override Frequency approaches it.

There are 45 Latent Memories hidden in the Hellas Basin, they are glowing circular objects which can be destroyed with a specific damage type. Destroying 35 unlocks Cache ANSERIS, which can be found in Core Terminus and contains the Worldline Zero Exotic Sword. Destroying all 45 unlocks Cache PAVONIS, which is found in Olympus Descent and contains the G-335 Anseris Overdrive Exotic Sparrow. Players have to use different types of damage depending on the color of the Memories' glow to destroy them.