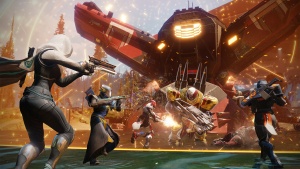 My sensors indicate… hmm, interesting. How should I interpret a detonation and multiple impacts?
—Failsafe, Injection Rig

Injection Rig is a Public Event added in Red War.

An injection rig descends from above, protected by Cabal enemies. Players have to defeat three Infiltrator Psions and then the Infiltrator Valus Centurion to complete this event. Each time one of the three Psions dies, the vents on the rig open and it deals burning damage to nearby players. The objective changes to "Evacuate!" until it is safe to approach the rig again. A bright orange dome covers the rig starting from the first evacuation phase, Guardians outside of it are safe from burning. Players and enemies can pass through the dome, but projectiles cannot.

This event can be made Heroic by destroying the vents. They can be damaged only during the evacuation phase, when they are open and glow yellow. There are nine vents on the rig: three on the top level, three in the middle and three in the lower level. Only one of the lower vents opens during the event. The Heroic version is triggered after destroying one vent on each level, and the Infiltrator Valus still has to be killed to complete it.