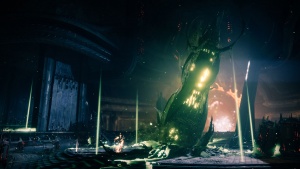 A Cryptolith
Wrathborn Hunts are Strike-like short missions introduced in the Season of the Hunt.

Wrathborn Hunts are unlocked after completing the Trail of the Hunted mission on the Moon and obtaining the Cryptolith Lure from The Crow afterwards. The Lure has to be charged by completing strikes, Crucible and Gambit matches. The Lure also has random bonus objectives which accelerate its charging progress.

Once the Cryptolith Lure is charged, the player has to socket a Lure mod into each of its three slots. The first mod determines which boss the player will hunt, as well as the reward that is received. The second and third mods affect the reward obtained, changing the weapon's available perk pool, the piece of armor's possible stat rolls, or increase the number of Lure Mutations or pieces of Recon Data gained. After the Lure is configured, the player has to bring it to a specific Cryptolith to initiate a Wrathborn Hunt. Fallen bosses can be hunted by placing the Lure by the Tangled Shore Cryptolith. Hive hunts begin at the Dreaming City Cryptolith.

Once the lure is placed, a large Wrathborn enemy will be summoned, which will escape after 2 ½ minutes has elapsed. If the Wrathborn is taken down to low health, it will flee and take all the additional enemies with it, leaving a small ball of energy behind. Interacting with it spawns a green trail, which leads to the beacon that loads the player into the mission itself. Each boss is covered by an immunity shield which can be damaged only while the player is under the Wrathborn buff, which is acquired by standing in green pools that are dropped when killing certain enemies during the Wrathborn fight. The buff lingers for 5 seconds after the player leaves the pool, and the pool disappears after a while. The boss regains their shield after some time.