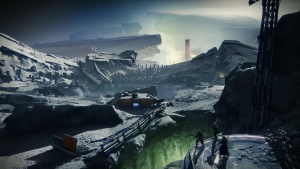 An ancient evil stirs beneath the shattered surface of our Moon.

The Moon is a Destination introduced in Shadowkeep. It is mostly inhabited by the Hive, but Fallen and Vex can also be found on its surface.

The Moon can be accessed by any player who completes the A Mysterious Disturbance quest, the first mission in the Shadowkeep campaign, it is available even without owning the expansion. The whole story unfolds on this destination.

There are two landing zones: one on the south, in the Sanctuary, near the Moon's two vendors: Eris Morn and the Lectern of Enchantment, they both are unlocked over the course of the Shadowkeep story. The other landing zone is in the Sorrow's Harbor, on the north, where the Altars of Sorrow are located. There are three more main zones: the Archer's Line on the west, the Anchor of Light on the east, and Hellmouth in the middle. Each contains an entrance to the Moon's underground sectors.

The Moon's patrols are slightly different from those found on the other destinations. Instead of a beacon, the player has to interact with Nightmares of various Guardians. The Scan patrols are accepted from Toland, who looks like a white wisp.

The main resource on the Moon are Helium Filaments, which can be found in Helium Coils lying in piles on the ground.

The Scarlet Keep strike, the Garden of Salvation raid, the Pit of Heresy dungeon and the Nightmare Hunts can all be accessed from the Moon map.

The Trove Guardian is a major Knight that spawns in either Anchor of Light, Archer's Line, or Hellmouth. Its location changes weekly. After this rare enemy is defeated, a set of platforms spawns, they lead to a chest which can drop Glimmer, Helium Filaments, Phantasmal Fragments and Rare gear.

The Bone Collector is a major Acolyte that spawns in the Anchor of Light. It has to be defeated during the Symphony of Death quest.

The Lunar Scavenger is a major rare enemy that can spawn in the underground block of the Moon or its Lunar Battlegrounds and Traitor's Ketch sectors. It does not react to the player unless attacked, and its health bar does not appear until it is fought. Defeating this enemy spawns several waves of different enemies with a boss at the end, each combatant is also called "Lunar Scavenger". A reward chest spawns after the boss is defeated.

There are four Wandering Nightmare bosses, which spawn in major areas and rotate weekly. They appear as a red cloud, and have to be interacted with to initiate the battle. They despawn if not defeated fast enough, and the cloud reappears shortly after. The Fallen Council spawns in the Archer's Line and consists of a Dreg, a Vandal and a Marauder. The Nightmare of Xortal, Sworn of Crota is a Knight that spawns in Sorrow's Harbor. The Nightmare of Horkis, Fear of Mithrax is a Captain found in the Anchor of Light. The Nightmare of Jaxx, Claw of Xivu Arath is an Ogre which spawns in Hellmouth. Defeating the boss spawns a reward chest.

Some of the chests found on the Moon are protected with Hive runes. There are three runes on a chest, and three plates with a single rune on each are hidden somewhere in the vicinity. The player has to shoot these plates in the order shown on the chest (left to right) to be able to loot it. A major Knight spawns if a wrong rune is shot, defeating it allows the player to restart their attempt at opening the chest.

Every loot source on the Moon has a chance of dropping Lost Ghost Traces and Small Rice Cakes. Lost Ghost Traces can be turned in to Eris Morn in exchange for Dead Lost Ghost quests, which ask the player to find a specific dead Ghost on the Moon. Small Rice Cakes can be given to rabbit figurines found in certain places on the Moon. There are nine rabbits in total, feeding all of them rewards the players with a Triumph and allows them to get the Lunar Gloom Shader from interacting with the tenth rabbit in the Sanctuary, directly under the landing platform.

There are also 20 Necrotic Cyphers scattered around the Moon, scanning them rewards the player with Inquisition of the Damned lore.

Players can place a special Raid Banner in the Sanctuary by spending 5 Phantasmal Fragments. It lasts for a very short time, but while it is up every player can rally to it to get full Super and ammo.

Players can also play the Tire Game in the Sanctuary. To the right of the landing platform there is a console. Interacting with it costs

1000 and spawns 3 tires, one at a time. The player has to push each tire down a ramp leading to six craters. Landing all three tires in the middle crater rewards the player and everyone who was in the Sanctuary at that moment with a Triumph.


Do Not Sell My Personal Information
Retrieved from "https://d2.destinygamewiki.com/mediawiki/index.php?title=Moon&oldid=92911"
Category: