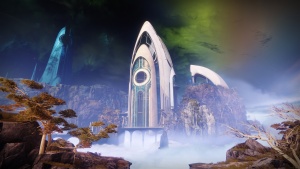 A long-hidden stronghold sacred to the Awoken of the Reef.

The Dreaming City is a destination introduced in Forsaken. It is occupied by the Scorn, the Taken and the Hive.

Petra Venj is the only vendor on this destination. She offers quests, bounties, and Charges of Light for the Blind Well. Awoken Corsairs serve as patrol and mission beacons. Scan patrols can be accessed by interacting with Shuro Chi, a Techeun, and require defeating enemies.

The destination's resource is Baryon Bough, it can be traded to the two Ahamkara skulls located in the Harbinger's Seclude, Huginn and Muninn. Muninn offers a Charge of Light-Tier II for 25 Baryon Boughs, and Huginn offers a Tincture of Queensfoil in exchange for 50 Baryon Boughs.

The Last Wish raid, the Shattered Throne dungeon and the Corrupted strike can be accessed from the Dreaming City map.

Ascendance is a special mechanic tied to the Dreaming City. The player becomes ascendant by consuming a Tincture of Queensfoil. It gives a 30-minute buff that allows the player to see hidden platforms and chests, as well as portals to ascendant challenges. Drinking the Tincture while wearing Reverie Dawn armor gives it a Taken appearance.

The Dreaming City is stuck in a three-week loop due to Riven's Curse, which affects certain parts of this destination. The curse grows stronger with each week and then resets back to the weakest.

The Ascendant Challenge is a weekly activity in the Dreaming City. Each challenge is located in a different area and is accessed through an ascendant portal. A player must be ascendant in order to see and enter these portals. A message saying "The seam between realities grows weaker..." appears when the player is near a portal. Ascendant Challenges can be completed in a fireteam of up to three players. If a player dies while inside a Challenge, they respawn outside of it. If there are no more players present in the Challenge, it resets. When all players leave a Challenge through the exit portal, the Challenge resets and the portal leading back inside reopens after a short while.

There are 6 Ascendant Challenges:

A pair of hidden bosses can be summoned near the entrance to the Blind Well in Divalian Mists. There are three circles made of pebbles: one in front of the entrance, one to the left, and one to the right. Occasionally these circles glow, and having one Guardian standing in each spawns two bosses: Paradii, the Vigilant (Abomination) and Bakken, the Relentless (Taken Knight). The glow seems to appear randomly, there is no known trigger for it.

A rare enemy called Farseer's Saboteur (Taken Centurion) occasionally spawns in Rheasilvia. It drops an Awoken Charge orb when defeated. Picking it up makes the player Exhausted, preventing them from sprinting or double jumping, but it can be thrown to other players. The Charge has to be delivered first to a pool of purple light to remove the Exhausted debuff, then to a pedestal where it can be deposited, both are located on islands howering in the eastern Rheasilvia. Depositing a charged orb summons Pauurc, the Farseer's Heir (Taken Ogre) in the center of the bridge. The boss is shielded, but the shield can be removed by throwing charged orbs at it. Pauurc is protected by Taken Knights and Taken Wizards who drop Awoken Charges when killed, and the pools of light spawn around the encounter area. Once the shield is removed it does not come back.

A special Taken Blight can appear in the Strand, Divalian Mists and Rheasilvia. It lacks a shield and spawns minor Taken enemies. Destroying the Blight summons Bracus Payne, the Called Hand (Taken Centurion).

There are three sets of hidden chests which can be visible only while ascendant. There are 10 chests in each set, and only one set is active each week, they change depending on curse strength. While these chests can be seen only while ascendant, it is possible to loot them even without the buff. Each set of ascendant chests is connected to a triumph.

There are also two types of locked chests. The first one can be found in the Strand, Divalian Mists and Rheasilvia. When the player tries to interact with one, they see a message saying "Wayward magicks numbered three guard a lock without a key...". The player has to locate three Arc Charges in the area where that chest spawned and bring them to three receptacles near the chest to unlock it. The other type can be found in the Gardens of Esila. Interacting with this one displays a message saying "Warded by the wormhost." It can be unlocked by killing 10 Hive worms in the area, they spawn in random spots.

There are nine cat figurines hidden around the Dreaming City. By offering each of them A Small Gift, which drops from any loot source on this destination, the player receives a triumph and the Ennead emblem.

By completing Petra's weekly Blind Well bounty the player receives an Offering to the Oracle, which can be given to the Oracle Engine in the Spine of Keres. On the first two weeks of the curse cycle, giving the Offering spawns a chest. When the curse is at its strongest, the offering opens a portal to the Queen's Court, which contains a chest with a Queen's Bounty.

Enemies in the Dreaming City can drop a quest item named Corsair Down. To complete this quest, the player has to locate an Awoken Corsair's corpse based on the clue in the item's description. Interacting with the corpse spawns a wave of enemies, defeating them rewards the player with a chest and Corsair Badge. The Badge can be given to the Awoken Corsair stationed in a cave in the Divalian Mists in exchange for a rare piece of gear.

Lastly, there are Ahamkara Bones and Corrupted Eggs. Both are scattered throughout the Dreaming City and its activities. Bones can be collected for a triumph, they used to give lore prior to Beyond Light. Eggs can be destroyed only with the

Wish-Ender bow, which gives a triumph and the

The Dreaming City has its own loot pool, with gear that cannot be obtained anywhere else. Ordinary open world drops can also be obtained on this destination.