The Shattered Throne is the first dungeon in Destiny 2, introduced in Forsaken. 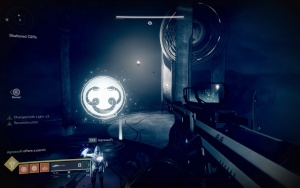 Tower of the Deep is located to the left of the Ingress. Its Labyrinth Architect is a Taken Captain.

Garden of the Prophet is located to the right of the Ingress. Its Architect is a Taken Vandal.

Tower of the Sky is located across a broken bridge from the Garden of the Prophet. The boss is a Taken Hobgoblin.

Temple of the Infinite is located across a bridge from the Tower of the Deep. Its boss is a Taken Centurion.

Shattered Cliffs can be found by following a side path starting shortly before the Tower of the Deep. The Architect is a Taken Phalanx.

Binary Shrine is the building in the center of the area. The Labyrinth Architect is a Taken Minotaur.

Hallowed Ground is the building accessed from the Ingress. Its boss is a Taken Captain.

The Taken Captain in the Hallowed Ground is always the last Architect the players have to defeat, doing so unlocks a gate in the floor, allowing the group to drop down into the Descent.

There are three hidden bosses in the Shattered Throne, they have to be defeated while holding onto their Dreaming Tokens from the ??? mission to obtain the

Wish-Ender. They have to be defeated before the stages they appear in are completed.

The Tower of the Deep has a second floor, it can be accessed by jumping in from rocks and statues outside. Inside there is an Arc Charge, which has to be delivered to the rooftop of the Binary Shrine and into the hands of a statue without an orb. Doing so spawns Theratos, Archersbane and Querim, the Waking (Taken Minotaurs). Defeating both turns the player's Dreaming Token of Querim into the Waking Token of Querim. 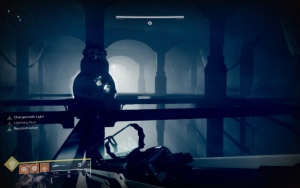 The Taken Ogres room.
The players have to drop down into a large open area. There is a path leading up the stairs into a large building. Several Taken Minotaurs and Taken Acolytes guard the area, assisted by Taken Vandal snipers. Taken Phalanx spawns midway into the ascent, and Asterion, Set Apart (Taken Captain) stays near the door, which opens after the boss is defeated.

The building's first room contains a bridge with missing sections, and narrow lanes near the walls which players can use to cross the first gap. Some Taken Knights are stationed on the lanes, Taken Hobgoblin snipers stay in the farther part of the room, and Taken Phalanxes occupy the bridge. After reaching the other side, the team has to turn left and go up the stairs into a room with support beams connected to pillars above the abyss. Taken Ogres spawn by some of the pillars and use their Rotten Surge attack to push players off the beams. Other pillars have Taken Blights on them, with rotating portions which knock players down into the pit. The group has to navigate to the solid ground to the left, which leads to a room with a slowing field.

Players cannot sprint while in the field, their health does not regenerate, and Shadow Thralls spawn in the area infinitely. The team has to go down the stairs to the left, take a left turn after entering a large room, go down a smaller set of stairs and jump out of the slowing field to a lower floor. A group of Shadow Thralls also spawns after the landing.

The team will exit into an open area with pieces of floor floating above a bottomless pit. Players have to go to a closed gate on the other side, then turn right and move in that direction while hugging the wall. Taken pulses push players into the abyss, so do the Taken Phalanxes which spawn at certain points on this path. After reaching another section of floating floor pieces the players have to jump across into an area with many Taken Phalanxes, defeat them and enter the building they were guarding.

The first set is located in the Ogre room. The Arc Charge is behind one of the rightmost pillars when viewed from the entrance to the broken bridge room, where Toland occasionally hangs out. The statue is on the wall across from that entrance, on the leftmost platform. The second set is located in the slowing room. The player has to turn right and get the Arc Charge in a side room after entering the field. The orb is deposited into a statue on the right wall in the landing room.

The building contains the first boss of the dungeon.

Vorgeth is a Taken Ogre protected from all damage by a shield, it stays in the middle of the room. Four Keepers of Petitions (Taken Wizards) spawn near each wall, they are protected by Taken Vandals, Taken Goblins and Taken Hobgoblins. When a Keeper is defeated, it leaves a sphere behind, collecting one gives all players the Petitioner's Mark buff, which lasts for 45 seconds and stacks up to four times. If Petitioner's Mark's timer reaches 0, players die, but it can be refreshed by picking up more spheres. At four stacks the buff turns into Petitioner's Burden, which can be deposited into one of the four altars surrounding the boss. Doing so briefly removes the shield from Vorgeth, allowing players to damage it. Once a Burden has been deposited, that altar cannot accept one again, meaning players have to defeat the boss in four damage phases or less. 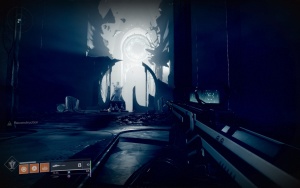 Sjur Eido.
Once Vorgeth is defated, the gate at the far end of the room opens leading to the statue of Sjur Eido. Players on the

Wish-Ender quest can talk to her to unlock the ??? mission on the Tangled Shore, completing it gives them the three

Waking Tokens can talk to Sjur to receive the

Behind the statue there are floating pieces of a bridge leading downwards, where four Hive Wizards surround a lift of sorts. The group has to jump on the lift and float up into the next room, where Taken Acolytes and Yamaat, Ascendant Sentinel (Taken Knight) protect another lift.

This one takes players to a narrow beam, at the opposite end of which is a drop into the next room, guarded by Taken Captains. The next room contains Taken Vandals and another lift, which takes players to a broken narrow beam and more Taken Captains. The beam leads into a room with a staircase and infinitely spawning Shadow Thralls. After ascending, the players should take a right turn to another portion of narrow beams and Taken Phalanxes.

After following the path the players have to take a right turn and hug the wall while avoiding Taken pulses and Taken Hobgoblins. The wall eventually ends by some stairs, which lead to several lifts which take the group to Dûl Incaru, the Eternal Return. 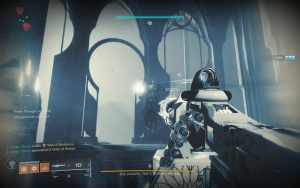 Dûl Incaru, the Eternal Return.
Dûl Incaru is a Hive Wizard, she is protected by three Fatesmiths of Incaru (Knights) and a large amount of Taken Psions which spawn throughout the battle. She is immune, players need to get the Finite Thought buff to be able to damage her. Spheres with this buff drop from Fatesmiths, once one player picks it up, their teammates get the buff as well, and it can stack up to three times, increasing damage dealt to the boss. The buff lasts for 45 seconds, and when it expires, the team dies. Each player can remove their buff by standing on a table in the center of the stage.

Fatesmiths wield only axes and have no ranged attacks, but they can teleport and move faster the more health they lose. Occasionally Dûl Incaru conjures a large crystal which makes her Knights immune to damage, the crystal can be destroyed by shooting at it. She also summons her Fatesmiths back after they have been killed.