Retribution is a PvP Map.

Retribution is located on a Cabal warship in the Upper Stratosphere of Mars. It is a PS4-exclusive map that was launched with the base Destiny 2 game.

Hangar is one of the team spawn areas. It is relatively small, but it comes with plenty of cover options. Players should be mindful of where they step because there are many drops towards the bottomless abyss below, which will result in an instant death.

Blue Ring is a long, curved corridor on one side of the map's central area. It features few cover options and a limited line of sight. It is also somewhat narrow, so intense firefights are more likely than not to take casualties here.

Left Disc is a floating platform between Hangar and Left Ledge. It is quite small, but it offers a large central piece of cover. This makes it a great fallback position when players need to catch a breather.

Left Ledge is an area that is a part of a major movement lane. It connects to Blue Disc through an automated door. Staging an ambush at the door will leave enemy Guardians little chance to retreat before they fall into your crosshairs.

This area comes with a good line of sight towards Left Disc.

Deck is a rather large team spawn zone. It is the largest exterior area on the map and it features good firing angles towards both Left Ledge and Right Ledge. However, accessing the inside of the ship cannot be done from this zone.

Right Ledge holds a Power Ammo spawn point. Other than that, it is an identical copy of Left Ledge, just mirrored. It features an automated door leading towards Red Ring.

Right Disc is a copy of Left Disc, but it does not offer Power Ammo. Also, the surrounding area is ruined with walkways missing, which requires more precise jumps when navigating the area.

Red Ring is similar to Blue Ring, but it comes with fewer access points. It also offers a Power Ammo spawn point to make up for the relative lack of cover and the somewhat limited line of sight.

Barrel serves as the center of the map. It comes with very limited lines of sight and three access points. It is also a high-traffic intersection, so players venturing there should be ready for an encounter. 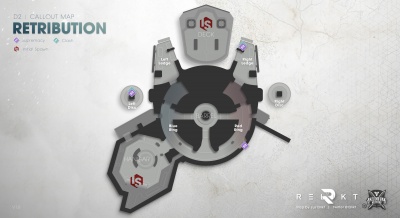