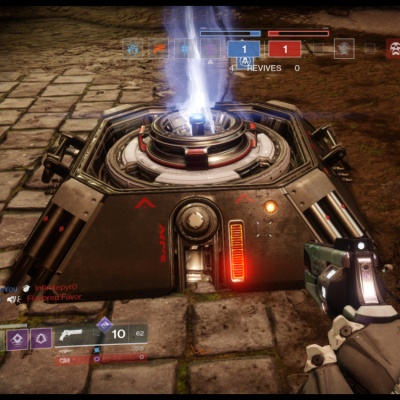 Countdown is a PvP Mode accessible from The Crucible.

Countdown is a 4v4 mode available only as a weekly rotating gamemode. It consists of up to 11 rounds of play.

Countdown is very similar to the Bomb Defusal mode in the popular e-sports FPS series - Counter-Strike. It features 2 bomb sites where a team must plant a charge and the other team must make sure they do not achieve this. Each team has 2 ways of winning a round.

Attacking team can either:

Defending Team can either:

A charge takes about 3 seconds to be armed and a bit over 5 seconds to be defused. When a charge is set, the 2-minute timer and the other charge are taken out of play. Instead, the bomb timer starts ticking down until it explodes or is defused, which ends the round. A bomb timer will expire after approximately 40 seconds.

The first team to win 6 rounds is declared the winner.

There is only 1 Power Ammo spawn point in each Countdown match. These become active 30 seconds into the match and respawn every 60 seconds.

Automatic respawns are not featured in Countdown. Instead, each player has a single Revive Token for each round which they can use to revive an ally. If a player dies and they have not used their token, it is permanently lost.

A player can only be respawned when they have died at least 20 seconds ago.