From Destiny 2 Wiki
Jump to: navigation, search
Midtown is a PvP Map.

Midtown is set in The Last City zone on the planet Earth. It was launched with the base Destiny 2 game as one of the initially-available Crucible maps.

Columns is an area that holds one of the team spawn points. It also allows good view towards an important movement lane on the map. This makes it a good spot for snipers.

However, Columns has all of its access points on just one side, which makes escaping a sniping position very difficult.

The Dock area is at the edge of the map. It comes with two access points and plenty of cover. When in a firefight, Dock is a good location to catch a breather and recover some health.

Alley is a long, narrow area that connects Columns and Low Street. Due to its relative lack of cover, it is also a popular sniping lane. Long-range weapons are recommended when entering the zone, as well as quick feet.

Grass is a narrow area that connects Low Street and Alley. It is a popular flanking and rotation lane.

During Control matches, Grass holds one of the Capture Points on the map. In Countdown games, one of the two charges on the map can be found in this zone.

This tiny ledge between Grass and Marina is best used to break line of sight with a pursuer and draw them closer, in order to engage at close quarters.

Marina is a small area that features a ramp around a small structure. Inside the structure itself, there is plenty of cover players can utilize to catch a breather. There are also several handy escape routes.

Low Street is the central part of the major movement lane on the map. It is not easy to defend, but most players will want control over the area. During Clash, Supremacy, and Countdown matches, it holds a Power Ammo spawn point.

Market is a key area during Control matches because it holds one of the capture points. The area is quite open, with one central piece of cover. This makes it suitable for both mid-range and long-range engagement. Additionally, the area has many access points players can employ when they need to retreat.

Service is a narrow tunnel that connects Middle to Low Street. It features no cover, but it is a good zone to use to flank an enemy or retreat from one. It is also a good zone to set up an ambush.

Middle is the central area of the map. It features access points from all sides which makes it a high-traffic area. Guardians should keep in mind that it is extremely likely to encounter a firefight in this zone.

Apartments is an area with several narrow access points, making it easily defendable for a well-organized team. It also connects to several other zones, which makes it a good place to fall back to and regroup.

Courtyard is a small area at the edge of the map that is best used as a place to regroup. It also offers good lines of sight towards adjacent areas and handy retreat routes.

During games of Clash and Supremacy, it also holds one of the Power Ammo spawn points.

Lounge is best used for close-quarter combat. It is narrow zone, with a low ceiling, so it is a good spot to set up an ambush of an overly-aggressive opponent.

Rugs is an important strategic area. It holds a capture point during Control matches and a charge during Countdown games. It is also quite difficult to hold, due to the placement of its entry points. However, those same access points can be employed as cover by skilled snipers aiming for High Street or Market.

Other than that, it is a relatively narrow zone with low ceiling, so movement through it is quite limited.

Shop is an open area on one edge of the map. It connects to all six adjacent zones, making it an excellent flanking route. However, players should avoid staying there for too long, due to the lack of good cover.

Players moving through High Street should always choose the shortest path. The area is quite open and there are several good shot angles towards it. A skilled sniper could easily get a kill here if their opponents are unwise enough to take their time traversing the area.

The most important point in Maintenance is the passage leading to Shop. In order to reach it, players need to do a very well-timed jump, which makes it good for shaking off pursuers or setting up some long-range shots.

Garden is a relatively open area on the edge of the map that holds one of the team spawn points. The central planter offers some good cover, but various obstacles block the otherwise-clear shots towards its access points. Wise Guardians would not linger here for too long.

C & B - are the points you want to try and get control of. C side of B has the advantage of not having to come through the horrible choke points on the entrance to B flag. Plus A spawn seems real shifty and can spawn enemies there at any moment. 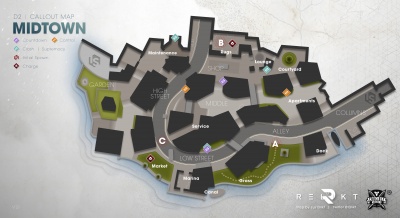 
Do Not Sell My Personal Information
Retrieved from "https://d2.destinygamewiki.com/mediawiki/index.php?title=Midtown&oldid=58883"
Categories: