Emperor's Respite is a PvP Map.

Emperor's Respite is a Crucible map set on the Leviathan ship. It was introduced to Destiny 2 when the Leviathan Raid was first beaten by the Clan "The Legend Himself". It was also the first map to become a part of the Trials of the Nine Crucible Mode.

The map is currently featured in both the Quickplay and Competitive playlists after its time in Trials of the Nine came to an end.

A & B - are the ones you want here. C is a horrible spawn and it's difficult as hell to defend both B while maintaining control of C. If you have A spawn under no circumstances push too deep into C, you can flip the spawns and potentially flip the tide of the entire game against your team. If you have C spawn I'd suggest trying to move through the far right of the map and try and grab A control. This can cause the enemy to spawn at C instead and you'll have an easier time at grabbing B afterwards. Then maintain your control. 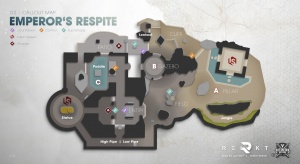 General game plan: For both OFFENSE and DEFENSE I ran one route and stuck with it for the most part. I highly recommend that your team has a game plan, doesn't have to be specifically mine but your team all needs to be on the same page. So the route our team took is to have one anchor and three players playing as a unit for both OFFENSE and DEFENSE.

To go more in depth while on DEFENSE, your team will spawn up by Patio. It is the anchor's job to stay in this area and hold the mid lane looking into the enemy spawn to see if they are pushing Patio. I highly recommend that the anchor needs to be the best player on your team since this player will be having the greatest risk. The three remaining players will rotate towards the Entry bomb to deny the enemy team from playing that side of the map. By taking this route you prevent an immediate push into entry. By having an anchor by Patio you also prevent the enemy team from sending a flank Patio side as well.

So there are two ways to play it. If the enemy team is all Entry. The anchor can either flank from Patio side or double back to Entry to help out your teammates, depending in how the enemy is playing. If the Anchor is a nightstalker that would be great because you can easily get behind them by going invisible. It is up to the people at Entry to stay alive and wait for the Anchor to flank. The other scenario is that the Anchor sees and calls out that they are all going Patio. It is up to the Anchor to hold off these guys as long as the Anchor can while the three teammates flip the spawn from Entry into the enemy initial. Here you have to play the numbers game. See that there are three pushing patio? The entry teammates need to flip the spawn as fast as possible because there will be only one enemy for them to kill. You must do this quickly because the Anchor is buying the teammates time to commit the flank. The Anchor dying right away without killing or weakening anybody or if the flank is too slow it is a failed round.

On Offense the concept still applies to having an Anchor and three teammates together. On the start of the round the three players rotate towards entry and the Anchor peeks the mid lane by Patio to scout out the enemy. If there is more than one player Patio side it is safe for your three teammates to go into Entry and kill whoever is in there and set the charge. If all enemies are in Entry, your teammates must stay alive in your initial spawn while the Anchor sets the flank by Patio. Again going invis with Nightstalker is great in these situations but again the best player should have the Anchor role.

So another outcome is that they match your gameplan where they send 1 patio and 1 entry, either when you're on Defense or Offense. That's why the Anchor should be the best player so they can engage and win the 1v1 while the three players distract the enemy players or rotate and help when you see the enemy rotate towards the Anchor.