The Fortress is a PvP Map.

The Fortress is set in the EDZ zone on the planet Earth. It was launched with the base Destiny 2 game as one of the initially-available Crucible maps.

Shore is a zone on the edge of the map that holds one of the team spawn points. It features some natural rocks that can be used as cover, but it is mostly an open area suitable for long-range engagement.

Tower is a small enclosed area between Shore and Rocks. It features some good shooting angles towards both adjacent zones, especially if players make use of the small upper ledge found here.

Ketch is an interior area inside some Fallen wreckage on the edge of the map. It is quite tight and suitable for close-quarter combat. Players inside Ketch can also use it as cover and engage approaching Guardians from long range. The area comes with three access points, one of which is outfitted with an automated door. The door itself is quite loud, so hearing it usually means that players are about to flank you.

During Control matches, Ketch holds one of the Capture Points and during Countdown - one of the map's charges.

Crash is a well-sized exterior area with several entry points. Most of it offers relatively good cover behind natural rocks, but a portion of the zone lies within a deadly sniping lane. During Supremacy and Countdown matches, this zone also serves as a source of Power Ammo.

Meadow is an area on the edge of the map that is mostly used as a flanking route between Crash and Cave. It also offers some good shooting angles towards adjacent zones.

Cave is an enclosed area with very little cover. As its name suggests, it resembles a natural cave with five access points. It is also a high-traffic area, so players should keep their guard up when venturing there.

Grotto is a large narrow zone between Rocks and the edge of the map. It features several wide access points and it also serves as a team spawn location.

During Control matches, this area also holds a Capture Point.

Rocks is the central intersection of the map. It is a fairly large area with some bits of useful cover. Players should keep in mind that Rocks is also a part of a deadly sniping lane.

During Supremacy games, this area holds a source of Power Ammo.

Passage is a short and narrow lane between Rocks and Castle. It mostly serves as a flanking route, but due to its sharp corners and lack of cover, it is also a good location to draw pursuers into close-quarter combat or set up an ambush.

Castle is a very important zone in all possible match types. During games of Control, it holds a Capture Point. During Countdown, players can find both one of the charges and some Power Ammo here. As for Supremacy, a Power Ammo spawn point can be located inside Castle.

The zone itself offers some great shooting angles towards all adjacent areas. However, its three access points are arranged in such a formation that it can be difficult to hold against a well-organized team of Guardians, despite the good cover options.

Dungeon is a tiny interior area that connects Castle and Falls. It is mostly used as a flanking route, but it can also be utilized to draw aggressive Guardians into a close-quarter firefight or an ambush.

Falls is a relatively large area with plenty of cover options. Despite its generous cover, however, it is still part of a popular sniping lane. It is also a high-traffic area, so it is very likely to find an opponent here.

During games of Control, the zone holds a Power Ammo spawn point. 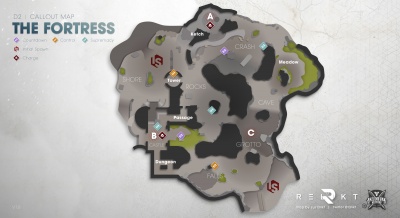