Black Talon is an Exotic Sword.

Black Talon Catalyst can be obtained by completing strikes, Crucible or Gambit matches. To unlock its upgrade, the player has to defeat enemies with this weapon.

With the Catalyst unlocked, shots blocked immediately after guarding with this weapon increase the damage of Crow's Wings for a very short duration. Masterworked Black Talon generates Orbs of Light on multikills and tracks the number of enemies killed with it.

Three months after the Taken War...

Hallam found her in the washroom closest to the Black Hull entrance.

Hallam let his Paladin-straight posture relax a little. "The Regent-Commander should probably attend the late prince's memorial. The Crows will want to see you. I hear they've commissioned a sword in his honor."

Petra ground her teeth. Then: "But I want people to believe." 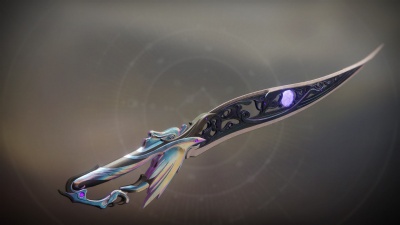 
Do Not Sell My Personal Information
Retrieved from "https://d2.destinygamewiki.com/mediawiki/index.php?title=Black_Talon&oldid=70657"
Categories: