Dead Man's Tale Catalyst is obtained by completing the At Your Fingertips quest. To unlock its upgrade, the player has to defeat enemies with this weapon.

The Catalyst adds the Dark-Forged Trigger perk to this weapon and Masterworks it.

Season of the Chosen

Upon the release of The Witch Queen, the Season of the Chosen content, including Presage, was removed from the game. Dead Man's Tale now appears in Xûr's inventory every weekend, with randomly rolled perks. The Dead Man's Tale Catalyst now has a chance to drop when completing Vanguard, Crucible, or Gambit activities.

Gaelin-4's war beast leads us through balmy Venusian jungle. Our rifles low, our Ghosts high in the canopy like sentry drones.

"My vehicle is old. Needs maintenance. Been running too long without cutting the engine," I say.

Gaelin sends me a sideways look. "That shipwright still around? She used to make cider in the autumn. I swear, she kept us like a pack of strays."

I sigh. "No, I mean this thing." I run my hand over my body. "Besides, you know I can't go back there." I straighten the leather wrap around my Tex-foundry rifle.

"You know I literally tune myself, right?" asks the Exo Hunter.

"Just not like what I used to feel like. Not… spry. Not up here either." I tap my helmet.

"Tragedy. I feel for you. Have Gilgamesh tune you then."

"You two having issues again?"

I shake my head in a stiff, narrow lie. "You think we come back the same every time?"

"I do. Straight from the manufacturer ," Gaelin-4 says.

"Sometimes I get the feeling… something's different."

Gaelin stops and squints at me.

I dip my head and let my hood fall forward. "Nothing I can put my finger on, just little things. Adjustments."

I wait too long to answer. It's not because I don't know my answer, but because I want to feel like I still doubt it. I raise my head. Gaelin meets my eyes and looks up to the canopy.

He leans his shoulder into me and drops his voice to a whisper. "My Clip's a good one, but you need to realize Ghosts don't know anything. Nobody does. They're just like us. They get curious. They question. If you think something's coming unwound, you need to sit down and talk it out."

"Wait… did Clip change yo—"

"Please," Gaelin scoffs. "You're paranoid." He turns to keep walking and calls back, "Life changes you. Same with them. I'm the only one that stays the same."

Gaelin raises a fist and we stop. His war beast sniffs the air and turns us east. We continue walking.

"What'd you name the beast?"

"You've been reading too many of the Spider's books ."

I laugh. "Aren't you the man that said anything you got tying you down can be made into a noose?"

"You've been taking a lot of jobs with him? Those Fallen?"

"You're one to talk, Emperor's lackey. Some of those Eliksni aren't so bad." 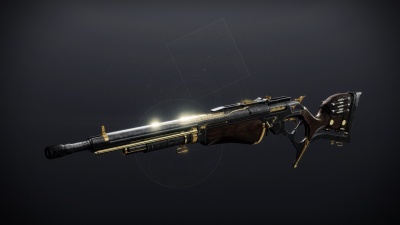