Detailed explanation on how to acquire TM-Moss Custom Bond

Tex Mechanica custom-made bond, the sign of a steady hand.

[Earp: T-4:59…]
Earp is the first to see the Sol Divisive materializing.

Naylor: Hobgoblins marked. The Sol Divisive belong to the Witness, I hear.

Earp draws and sends shots singing from his Vulpecula through Hobgoblins until expending his cylinder. He takes to the edges of the deck, reloads mid-dodge over a searing line rifle beam, and flicks a Skip grenade into their ranks.

Naylor: More snipers marked. I wonder if their Radiolaria is different from the main Collective.

Jolting Arc breaks the Hobgoblin formation. The remaining Vex pivot their attention to him. Arc amplification surges through Earp, shortening the span between him and his enemies. He hits their formation like a bolt jumping through open receivers, weaving chains of electricity through the outer ring of the deck, dancing between Sol Divisive frames with knife, cannon, and striking bolt.

Naylor: Cogburn is about to die.

Earp covers the distance to Cogburn's attacker in a flash. He slides, rolls between the Minotaur's legs, and delivers a thunderous counter-blow uppercut that leaves the Vex blind open. The Hunter levels his cannon with his target's vulnerable radiolarian globe and fires, leaving a frigid headstone in its place, which Cogburn pulverizes into shards with a backhand.

Cogburn lunges forward as enemies swarm the deck, shattering Goblin after Goblin with Behemoth fists like Stasis-encrusted pistons. He looks over his shoulder to Ana and Moss-2 clipping targets out of the sky, Earp drawing a circuit through the Vex at his flanks—

Bo: Minotaurs, phasing on your left.

Three newly materialized Minotaurs open fire. Cogburn is already in motion and slides under the blasts on Stasis sleet before hurling a Glacial grenade to cover his advance. Stasis crystals encase the closest Minotaur, and Cogburn crashes through it with shattering force, destroying them all.

Bo: Damn fine work. That's why I raised you. You're the closest I could get to a Cabal—Gunfire incoming, right!

Cogburn draws his Barricade through a Dark sieve; a wall of Stasis erupts to his right against the barrage. He dashes through it and into the Vex attackers, wrapped in hoarfrost mimicry and destruction. His fists rain on the Sol Divisive, an avalanche to bury them under the Darkness they claim to serve.

Cogburn stands in a heap of twisted frames; radiolarian pools freeze solid at the lips of his boots.

A shot flies over his shoulder, downing a Harpy. He tracks it to Ana at the southern deck edge.

[Ana Bray: T-1:59…]
Ana Bray skewers a fifth Harpy, causing it to combust in a Solar blast that scatters the Vex descending on the Southern deck. She hears Moss's gun running low when a Cyclops phases into being below the deck. Ana flings a Gunpowder bomb high into the air and sparks it with a shot from her rifle, demolishing a dozen Vex with a booming explosion to open a firing window on the Cyclops.

As more Cyclopses phase in around her, Ana slings Polaris Lance and thrusts her empty gun hand forward; Solar flame ignites in her palm, forged into a Golden Gun. The heat of her shots leaves a molten trench and pools of simmering Light that drip over the observation deck. Her Golden rounds combust the air and sear holes through the eye of each Cyclops aiming to topple the Spire from under beneath the fireteam.

Jinju: Under a minute. Get ready, I'm starting my run.

[Moss-2: T-45]
Moss-2 braces his left arm and opens the barrels of his LMG to unleash a deluge of Void into the darkening sky. Harpies take evasive action, but many succumb to the hail of heavy munitions before they can align firing solutions on the Warlock.

No Name: From Moss-2's right hand, an Empowering
Rift flows, coaxing a Child of the Old Gods from
non-existence into the descending Vex, detonating
built-up volatility into a chain of violet consumption.

Moss-2/No Name takes cover to reload, and the Vex rain laser-fire upon them. A host of Minotaurs push his position.

No Name: His right eye juts to the advancing Minotaurs.
His right hand snaps toward them, palm open, and
discharges a Handheld Supernova that deletes all but
one Minotaur. It phases to his backside.

Moss-2 drops his machine gun to draw a sidearm, but the Minotaur is too fast and drives a metallic arm through the Warlock's gut, pinning him to the deck.

No Name: Moss-2's body shutters, his eyes sync, then he
unleashes a shockwave of Nova Warp erasure, detonating the
shield of the Minotaur pinning him and devouring it entirely
to stitch his wound. The Warlock rises like a marionette, floating in a violet singularity.

No Name: "Jinju is nearing the deck. Moss-2 will cover the
retreat." Moss-2 speaks as Light stiches their wound, eyes moving independently of each
other, his voice layered with another, unfamiliar and frying with interference.

[Jinju: T-0:00]
Jinju brings the jump-ship down through a screen of laser fire, breaking speed just long enough to stabilize near the observation deck. Ana leaps aboard and lays down covering fire for Cogburn to slide in and shield the ship from harm with glacial walls.

Earp boards with a flourish, hurling an Arcstaff into the sky to stick a Harpy like a lightning rod and clear the air for takeoff. Moss-2 is the last to board, Void volatility flittering off his body as Jinju punches the engines.

The fireteam blasts off toward the safety of the sun, followed by a wave of electrical distortion that leaves the complex dark and littered with fried Sol Divisive frames. 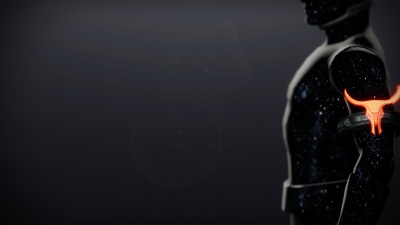