Riskrunner is an Exotic Submachine Gun.

Riskrunner Catalyst is obtained over the course of the A Spark of Hope quest. To unlock its upgrade, the player has to defeat enemies, and get Superconductor kills.

The Catalyst increases Riskrunner's range by 27 and Masterworks the weapon. Masterworked Riskrunner generates Orbs of Light on multikills and tracks the number of enemies killed with it. 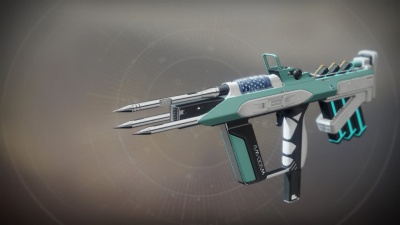 
Do Not Sell My Personal Information
Retrieved from "https://d2.destinygamewiki.com/mediawiki/index.php?title=Riskrunner&oldid=89238"
Categories: