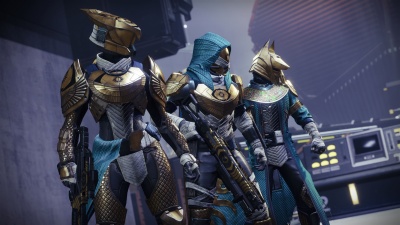 Trials of Osiris is a pinnacle PvP activity added in Season of the Worthy. Players earn Valor in this mode.

Trials become available every weekend, but each player has to complete the Trials Access quest to be able to participate. To queue up for a match, the player has to meet three conditions: their character has to be at Power Level of 1210 or above, they need to have a Trials Passage on them, and they need to be a part of a premade fireteam of three.

The Trials themself are a variation of the Elimination mode from the Crucible, where two teams with three players in each have to defeat all players in the opposing team. Power Level advantages are enabled in this activity, but bonus Power from the Seasonal Artifact is not counted in this mode.

Each tournament is held on a single map, has fixed rewards and lasts a weekend.

Winning seven matches without a single loss is called a flawless victory. When players go flawless, their Trials armor and ornaments glow. The glow is usually yellow, and fades after one week, unless the player goes flawless again. Every flawless player also receives two Emblems which modify their glow color. Light for the Lost changes the glow to white, and Flawless Empyrean makes it red.

Trials Passages can be obtained from Saint-14, the Trials announcer, who also sells Trials bounties and accepts Tokens during weekends.

There are five Passages in total, each counts the player's wins and losses. Should the player lose three times, they are unable to queue for Trials unless they reset their Passage or buy a new one. Players can reset their Passages at any time. Only one Passage can be held at a time, and while they can be switched for new ones, each purchased Passage also resets the progress. Passages are kept in the player's quest journal, and disappear on weekly reset.

Players receive Luminous Engrams depending on the amount of their wins. 3 wins give tier 2 powerful gear, 5 wins give tier 3 powerful gear, and 7 wins grant pinnacle gear. Flawless victory grants players access to the Lighthouse, a reward space with a chest containing pinnacle gear, which can be received only once a week per class. Once players leave the Lighthouse, they need to earn another flawless victory to be able to return.

Trials Tokens can be turned in to Saint-14 in exchange for Trials Engrams, which contains a piece of Trials gear that the player has previously collected.


Do Not Sell My Personal Information
Retrieved from "https://d2.destinygamewiki.com/mediawiki/index.php?title=Trials_of_Osiris&oldid=88903"
Categories: