Trinity Ghoul Catalyst can be found randomly in strikes, Gambit, or in the Crucible. To unlock its upgrade, the player has to defeat enemies using Trinity Ghoul.

The Catalyst adds the Forked Lightning perk to this weapon, reduces its draw time and Masterworks it.

"Marin Mansanas..." the Rifleman's voice hissed over her comm. "I did not think you would show."

Marin spat onto the dusty ground, scuffed it with the heel of her boot. Squinted across the flat, dusty expanse of the High Plains. Ignored the Rifleman to address the other person on the channel, ex-Corsair Errol Mayz, who stood alone just over seven hundred meters from her position with his hands bound behind his back and a canister of ether balanced on his head.

She could see his shoulders shift in an attempt at a casual shrug. His gruff voice tickled her ear through the comm. "Sorry, Rin."

"You know the wager." The Rifleman didn't like to be ignored. "Get on with it. If you think you can make the shot."

Marin's eyes flicked to the hills of rubble dotting the High Plains, looking for the Rifleman's perch. Almost a sure thing the four-armed lunk on the far ridge was just another of the braggart's decoys, but no point risking Errol's life over a guess. "I can make the shot. And I expect you to honor this wager when you're down a K of ether and I'm walking outta here with Mayz."

Rough alien laughter was the only reply.

She pulled three arrows out of her quiver and whispered, "Pom, whatever happens, don't come out." Her Ghost answered her with a pulse of warmth in her left hand.

Two arrows she tucked into her belt. The third she nocked to her old friend, Trinity Ghoul.

Errol's voice returned, so low she could almost feel hot breath on her ear.

Marin pulled the Ghoul taut, lined up her shot with the canister perched atop Errol's scruffy blue head. 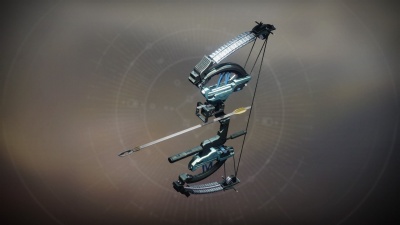