As we count the dead and make plans for recovery, I wish to record some of my recent scientific inquiries and theories before they are muddled by or altogether forgotten in the tangle of rebuilding what was lost.

Possibility. It exists within each life, an expanse and myriad of complexity explored openly through the philosophical constructs of choice and free will. Even when life ends, possibility carries forward in the lives touched and the projects created. When the actions of another end a life, Humans often refer to this act as killing or "taking a life." But where killing brings about a singular conclusion, Oryx's "Taking" was quite the opposite: he imposed a singular origin and all decisions that followed. He shaped the causality, the very history of another being, by force of will—recasting it into fanatical loyalty. In short, possibility never existed.

Like Ikora, my role is anticipating threats. While these Taken and their king may have been the most dangerous opponents we have ever faced, they likely will be the least of what is yet to come. And Taking has terrible potential if wielded by a mind more nuanced than Oryx's. Taking involves reforming matter in a self-contained reality, where the creator defines past, present, and future; imagine how a more insightful being could expand these definitions, to different ends. Overcoming a target's will must consume a large portion of energy. What if you used that energy for larger shifts in reality? You could teleport an army into a Hive mothership… move a fleet outside time and space… perhaps even alter a moon's orbit, devastating the planet below. The military applications could be far graver than simply creating an army.

Clearly, this is a subject in dire need of study. As the Taken themselves are frustratingly ephemeral, I have instead retrieved a variety of osmium ore samples from Oryx's flagship. They resonate in harmony with the Taken and thus may provide guidance in understanding the profane science behind them. 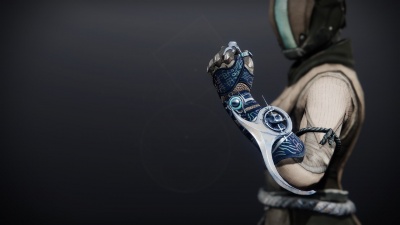