Embark on daring heists to repossess fragments of Rasputin's scattered subminds in order to restore the Warmind. 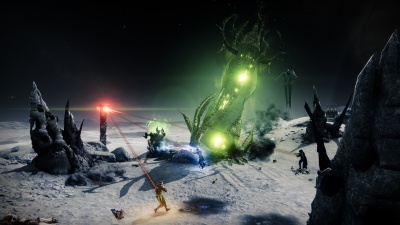 Access to this activity requires the player to own either the Season of the Seraph Season Pass or The Witch Queen Deluxe Edition. During the Season, non-Season Pass holders are given one free playthrough of the Heist Battleground: Moon mission.[1]

Missions can be launched directly from their destination's map, but do not feature the same modifiers and additional rewards as the playlist. The Heist Battlegrounds playlist and the current Legend difficulty Heist Battleground mission can be found on the H.E.L.M. map. The Legend difficulty mission rotates weekly, has additional modifiers, and does not have matchmaking.

Heist Battlegrounds missions are structured similarly to Strikes. Players will fight through a large amount of enemies (usually including Hive) in a linear progression, occasionally needing to complete objectives that will remove obstacles and allow progress to continue. These objectives vary depending on the mission. In the playlist,

Players must avoid hazards as a result of the Warmind's self-defense system. In outdoor areas, Warmind towers will aim a laser at any players in their line of sight; after 15 seconds, the player will die. By hiding behind cover and breaking line of sight with all nearby towers, the player's timer (visible as a buff) will start ticking back up. Inside the Warmind bunkers, players will often encounter laser barriers and other traps that can kill or hinder them.

At one point in the mission, a Deathtongue Chorister will spawn, with its appearance announced in the text log. This Acolyte will attempt to reach a floating Hive totem nearby. If it is not defeated before it gets there, it will channel Xivu Arath's Battlesong, disabling all players' abilities until it is defeated. It is recommended to kill the Chorister before it activates the totem, since doing so progresses Triumphs and can grant additional rewards at the end.

Eventually, the players will enter a Warmind bunker and reach the door to the submind vault. In order to open the door, they must navigate the nearby area and pick up PDT Refraction Cores. The Core can fire a laser, which can be used to destroy the Hive seals that are locking the door to the boss room. If players take too long (indicated by a timer shown under the current objective), enemy reinforcements will be called in.

After the boss is defeated, two chests will spawn: one that opens automatically, and a Seraph Chest that costs 500

Seraph Key Codes to open. The Seraph Chest is only available in the playlist, and will not appear when launching a Heist Battleground mission from the destination map icon.

These modifiers apply to the Heist Battlegrounds playlist. Launching a specific mission from the Destinations map will instead use the current modifiers for the Vanguard Ops playlist.

The following upgrades (unlocked at the Exo Frame by making progress in the More Than a Weapon quest) can affect gameplay in Heist Battlegrounds missions:

A treasure chest at the end of each mission rewards

Glimmer and gear. Completing missions will also grant reputation, which increases rank with the Exo Frame vendor in the H.E.L.M. Wearing seasonal armor will increase the amount of reputation gained, with each armor item granting a stacking boost (5% each, up to a maximum of 20%).

The following weapons can drop when opening a Seraph Chest.

These weapons have Weapon Patterns that can be learned through Deepsight Resonance extractions, allowing them to be crafted.

The following armor items can drop when opening a Seraph Chest.

The following upgrades (unlocked at the Exo Frame with