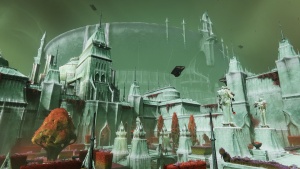 The inner workings of Savathûn's mind, brought to life within a mysterious throne world of her own making.

Savathûn's Throne World, also known as Court of Savathûn, Throne World, is a destination introduced in The Witch Queen. It is inhabited by Lucent Hive and Scorn enemies.

The Throne World patrol area can be accessed by players who complete the mission The Investigation from the Witch Queen campaign.

Players can use the Deepsight power in the patrol area. Deepsight nodes can be found throughout the Throne World. Interacting with them will affect something in the environment, such as creating platforms, or revealing hidden chests and puzzles. Levels 2 and 3 of the Deepsight power are earned by increasing rank with Fynch.

The Enclave and the Vox Obscura Exotic quest, both located on Mars, are accessible from the Throne World map in the Director.