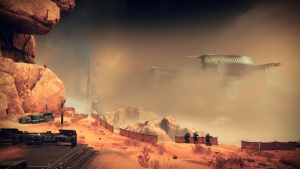 The Enclave on Mars

The Hidden's base of operations on Mars.

The Enclave is an instanced location on Mars. It was introduced in The Witch Queen.

The Enclave can be accessed by players after completing the mission The Arrival in the Witch Queen campaign. Its landing zone icon can be found on the left-hand side of the Savathûn's Throne World destination map in the Director.

During the Witch Queen campaign, the player will often return to the Enclave after story missions to speak to Ikora Rey, or watch cutscenes.

The main area of the Enclave provides players access to a Vault terminal and a Post Box terminal. The Evidence Board offers a series of side quests which involve investigations within the Throne World.

The arched doorway in the cliff wall leads to the Relic, which is used in Weapon Crafting. During the Witch Queen campaign, as a tutorial, players will use it to craft The Enigma, a glaive weapon. Further back in the Relic room is a door leading to a room with a vast chasm, with black discs floating in the air above. The player can use this room and the floating discs as a shooting range, and are given infinite ammo refills when ammo is consumed.