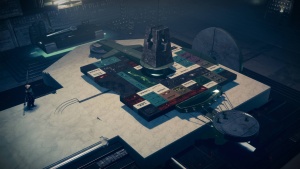 Weapon Shaping, also known as Weapon Crafting, is a gameplay system introduced with The Witch Queen expansion. It allows players to use the Relic at the Enclave to create copies of certain weapons, which can then be leveled up through use and further customized with unlockable perks.

Players gain access to Weapon Shaping after completing the first mission of the Witch Queen campaign, The Arrival, which does not require ownership of The Witch Queen expansion. The Relic is found in the Enclave on Mars, which is accessed from the Savathûn's Throne World map in the Director. The Relic quest will guide the player through a tutorial on how to shape new weapons. Through this process, players will craft

The Enigma, a Glaive. Additional quests given by the Relic Conduit will further explain aspects of the crafting process.

This series of quests will introduce players to Weapon Shaping. These quests will also reward players with crafting materials and Weapon Patterns.

These quests are available for free to all players.

These quests require ownership of

A weapon can only be crafted if the player unlocks that weapon's Pattern. Not every weapon in the game is available for crafting. All unlockable Patterns and their unlock conditions are viewable in the Patterns & Catalysts section of the Triumphs tab. Most Patterns are unlocked by extracting them from Deepsight Resonance weapons, while others are obtained from quests or activities.

Resonant Elements and certain Patterns must be obtained by extracting them from Deepsight Resonance weapons. These weapons are marked by a red border around their icons, and have a chance to drop from most activities. 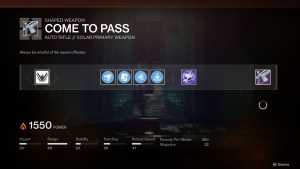 Players have two options when crafting at the Relic: Shape, which creates a new weapon, and Reshape, which modifies an already crafted weapon.

When Shaping a weapon, players must slot in an Intrinsic, 2 weapon perks (usually a Barrel and a Magazine), and 2 Traits. These depend on the weapon being crafted. Players can optionally slot in a Memento, which will unlock cosmetic bonuses when the weapon reaches specific levels.

Shaped weapons have a Weapon Level. This works similarly to attuning Deepsight Resonance weapons, but takes longer to reach 100% of a level. As the weapon increases in level, the player will unlock new perks and Intrinsics that can be applied during reshaping.

Players can shape as many copies of a given weapon as they want. This can allow for multiple versions of the same weapon. However, progress is not shared between these copies. If a shaped weapon is dismantled, its progress is not saved and is lost forever. The player can make a new copy of that weapon and start from level 1.

When Reshaping a weapon, players can reconfigure the weapon with different perks. However, there are some limitations. Previously crafted perks are not unlocked permanently; if a player swaps a perk out and wants to reapply it later, it will require the same material costs as it did before. It is also not possible to shape a weapon with more than one perk in each column, preventing players from toggling between different perk configurations.

At higher levels, Enhanced Traits will be unlocked. These are enhanced versions of other traits available on the weapon, improving the effect that a given trait provides. At Weapon Level 7, players can apply one of several Enhanced Intrinsics that provide a boost to one of the weapon's stats (e.g. Reload Speed or Stability). This replaces a weapon's usual Masterwork stat bonus, as shaped weapons cannot be upgraded like normal weapons.

There are a variety of materials used in Weapon Shaping: