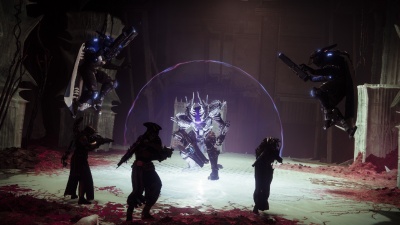 Access to this activity requires the player to own either the Season of the Risen Season Pass or The Witch Queen Deluxe Edition. During the Season, non-Season Pass holders were given one free playthrough of the PsiOps Battleground: EDZ mission as part of the Rising Tensions quest.[1]

Missions can be launched directly from their destination's map, but do not feature the same modifiers and additional rewards as the playlist. The PsiOps Battlegrounds playlist and the current Legend difficulty PsiOps Battleground mission can be found on the H.E.L.M. map. The Legend difficulty mission rotates daily (originally weekly), features additional modifiers, and does not have matchmaking.

PsiOps Battlegrounds missions are structured similarly to Strikes. Players will fight through a large amount of enemies (mostly Lucent Hive) in a linear progression, occasionally needing to complete objectives that will remove obstacles and allow progress to continue. These objectives vary depending on the mission. Occasionally,

Early in the mission, players will encounter an enemy called a Lighthoarder. This enemy has a glowing white aura, and will attempt to flee over time. The text log will indicate when it is about to leave. It will stand next to a Lucent Beacon, which will make it immune to damage. Destroying the beacon will make it vulnerable while it runs to find another. When the Lighthoarder is killed, it will drop Hoarded Light:

Collecting Hoarded Light will grant an additional seasonal weapon or armor item drop at the end of the mission.

Each mission ends with a battle against a Lightbearer Hive boss. After players deal enough damage to the boss, a pair of allied Cabal Imperial Optus Psions will appear, freezing the boss in place. The players will be teleported into the Mindscape, a psionic projection created inside the boss' mind, where they must fight the boss for a final time. When the boss loses a certain amount of health, it will disappear, summoning a pair of Aspects of Savathûn, as well as an

Unstoppable Ogre. This will happen twice per boss battle. These giant floating illusions of Savathûn, the Witch Queen, are immune to normal damage and can use Light-based Super abilities like Nova Bomb, Blade Barrage, and Stormtrance. Players must pick up Synaptic Spears that appear around the arena and repeatedly throw them at the Aspects of Savathûn to destroy them.

After the boss is defeated, and its Hive Ghost is crushed, players will be returned to the material plane, where two chests will spawn: one that opens automatically, and a Runic Chest that costs 500

Psychogenic Intel to open. The Runic Chest is only available in the playlist, and will not appear when launching a PsiOps Battleground mission from the destination map icon.

The following upgrades (unlocked at the War Table with

A treasure chest at the end of each mission rewards

Glimmer and gear. Completing missions will also grant reputation, which increases rank with the War Table vendor in the H.E.L.M.

Collecting the Hoarded Light dropped by Lighthoarders will grant an additional seasonal weapon or armor item drop at the end of the mission. Defeating Lighthoarders will also progress the Over Your Dead Body Triumph, which rewards a chapter of the Acts of Mercy lore book at each interval.

The following weapons can drop when opening a Runic Chest. They can also drop if the team defeated the Lighthoarder and collected its Hoarded Light.

These weapons have Weapon Patterns that can be learned through Deepsight Resonance extractions, allowing them to be crafted.

The following armor items can drop when opening a Runic Chest. They can also drop if the team defeated the Lighthoarder and collected its Hoarded Light.

The following upgrades (unlocked at the War Table with

Insight) can affect the rewards obtained from PsiOps Battlegrounds missions: