Piece of Mind is a Legendary Pulse Rifle.

With words or weapons, inaccuracy can be fatal.

Mithrax squeezed through the tight Bazaar alleyway. Visiting the Tower made him feel out of place, like a creature moving through a world designed for smaller beings—which, he supposed, he was.

As he reached back to pull his Ether tubes free from a snag in the jagged brickwork, he felt something collide sharply with his elbow.

His mind was suddenly filled with a flare of hot bitterness—a burst of bladed anger.

Mithrax looked down to see a Psion, clothed in Empress Caiatl's colors, wincing in pain and rubbing its eye.

"Forgive me," Mithrax said graciously. "You must be the one assisting the Guardians against the Hive."

The Psion looked up at him, then ducked its head in apology. The vision immediately dissolved from Mithrax's mind.

"I am Misraaks, Kell of House Light," he said, putting a hand to his chest.

The Psion paused, then gestured to its chest and Mithrax's head. It held its hand open as if waiting for a response.

Mithrax nodded his assent, and into his mind was placed a scattering of orange cubes, a spiraling helix of inky fins, and the sensation of biting through an unripe fruit.

The vision faded. "That is your true name?" Mithrax asked. The Psion gave a short bow.

Mithrax smiled. "I understand why Guardians simply call you 'the Psion,'" he said.

Mithrax stepped to the side, and the Psion moved past him. As it did so, there was a final vision: a wink of warm, cheerful brightness, fading but promising to return.

"To you, as well," Mithrax called, and the Psion vanished around the corner. 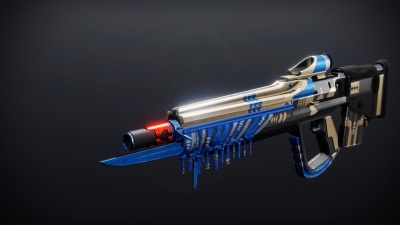