From Destiny 2 Wiki
(Redirected from Sector)
Jump to: navigation, search

Destinations are the various places which can be visited in Destiny 2.

Most of them consist of patrol zones, open-world areas containing activities, such as Patrols, Adventures and Public Events. Some Destinations are, or contain, social spaces — safe zones where players are unable to use their weapons and abilities. There are also special mission areas, which have to be launched separately from the map or a beacon in a patrol zone, and exist on their own maps, most of the time preventing players from meeting Guardians that are not a part of their fireteam. Each location contains several sub-areas, sectors. Lost Sectors found in patrol zones are a type of activity.

The Tower is the main social space in Destiny, it is represented by the Traveler in the Director.

It has a larger player capacity and contains more vendors than any other location: Commander Zavala is in charge of strikes, Lord Shaxx handles the Crucible, The Drifter covers Gambit, Ada-1 runs Forge Ignitions, Suraya Hawthorne deals with Clan business, Tess Everis represents the Eververse, Banshee-44 is the gunsmith, Kadi 55-30 is the postmaster, Master Rahool is the cryptarch, Amanda Holliday is the shipwright, and the Vault allows players to store their equipment.

When a Live Event is active, its vendor can also be found in the Tower.

The European Dead Zone is a patrol zone occupied by the Fallen and Cabal, although Taken enemies can be found in certain areas. Devrim Kay is the main vendor on this location, he offers bounties and hands out Engrams to players who bring him enough Dusklight Shards, a resource found in the EDZ.

The Cosmodrome is a patrol zone from the first Destiny, added as a mission area in New Light and brought back fully in Beyond Light.

The H.E.L.M is an instanced destination which serves as a seasonal hub for the content of all of the Seasons from Season of the Chosen onwards.

The Farm was a social space which used to function as a substitute of the Tower during the original Destiny 2 Campaign. It contained a postmaster and the vault, and was mainly used for several Exotic quests. It was accessed from the EDZ map. The Farm was removed alongside the release of Beyond Light.

Earth's Moon is a patrol zone from the first Destiny, reintroduced in Shadowkeep. It is inhabited by Hive, Fallen and Vex enemies, and contains the Pit of Heresy dungeon and the Altars of Sorrow public event. Helium Filaments are the Moon's resource.

Eris Morn offers Moon bounties and quests, and the Lectern of Enchantment sells Nightmare bounties and Essence quests. Neither of them accepts Helium Filaments.

The Derelict Leviathan is a destination introduced during the Season of the Haunted.

It is the Leviathan, the flagship of Calus, former emperor of the Cabal. When Destiny 2 launched, it orbited Nessus. It later disappeared after the release of Beyond Light. It now orbits the Moon, and is infested with egregore, a Darkness-infused plant-like organism, previously seen in the Presage mission. Enemies encountered here include Scorn, Cabal Loyalists, and Nightmares.

The New Pacific Arcology is the Titan's patrol zone, inhabited by the Hive and the Fallen. Sloane is the vendor on this location, she offers bounties and gives Engrams in exchange for Alkane Dust, Titan's resource.

Titan and all of its related activities is moved into the Destiny Content Vault in Beyond Light.

The Arcadian Valley is the patrol zone populated by Vex, Fallen and Cabal enemies. Failsafe is the main vendor and Microphasic Datalattice is the collectible resource of this location. Werner 99-40 is a vendor of the Leviathan, but is located in the Arcadian Valley.

The Leviathan and all of its related activities is moved into the Destiny Content Vault in Beyond Light.

Echo Mesa is the patrol zone of Io, which contains Vex, Taken and Cabal enemies. Asher Mir is the vendor of this location, he sells bounties and accepts Phaseglass Needles found on Io in exchange for Engrams.

Io and all of its related activities is moved into the Destiny Content Vault in Beyond Light. 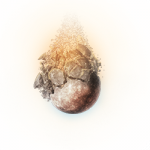 The Fields of Glass are a patrol zone inhabited by the Vex and Cabal, but its special sector, the Infinite Forest, can contain any of the enemy races except for the Taken. Brother Vance is the vendor of this location, he offers bounties and Lost Prophecies, and hands out Engrams in exchange for Mercury's Simulation Seeds.

The Caloris Spires are a mission area which contains the Lighthouse. It can be accessed only by players who have achieved a flawless victory in the current week of Trials of Osiris. There are no enemies or activities in the Lighthouse, the fireteam can only loot their reward chest and listen to Saint-14.

Mercury and all of its related activities is moved into the Destiny Content Vault in Beyond Light.

Mars' patrol zone is called Hellas Basin, it contains Hive and Cabal enemies. Ana Bray is this location's vendor, she sells bounties and accepts Seraphite found on Mars. This zone is notable for housing the Escalation Protocol public event.

Mars and all its related activities is moved into the Destiny Content Vault in Beyond Light.

The Tangled Shore is a patrol zone on the Reef. It is inhabited by the Fallen, Scorn, Cabal and Hive enemies, and contains the Etheric Spiral resource.

Spider is the only vendor on this location, he sells Shore bounties and Wanted bounties, the latter require players to kill various boss enemies on different destinations. While he has no reputation bar and does not accept resources, Spider exchanges them for other planetary materials or currencies, his offers change daily.

The Dreaming City is a patrol zone on the Reef, occupied by Scorn, Hive and Taken enemies. It contains the Blind Well public event and the Shattered Throne dungeon. Petra Venj is the vendor of this area, she sells missions, bounties and certain consumables. While the City has its own resource, Baryon Bough, it cannot be turned in to Petra.

This location is affected by a special curse mechanic. Depending on the strength of the curse, certain features of the Dreaming City change. The curse goes through three stages: weak, moderate and strong; each stage lasts a week and after the third stage it resets back to weak. Things that change depending on curse strength include: Petra's location, Ascendant chests locations, Ascendant Challenge location, Petra's story mission, Blind Well's enemies and Heroic boss

Europa, moon of Jupiter, is a patrol zone added in Beyond Light. It is inhabited by the Fallen and the Vex.

Europa can be accessed by all players who complete the Darkness's Doorstep mission from the Beyond Light campaign. It is available even without owning the expansion.

It has three landing zones: one on the south, in Beyond, another in the next area to the north of it, Charon's Crossing. The third landing zone is in Eventide Ruins, it is available to players who have completed the Beyond Light campaign. There are three main zones: Cadmus Ridge which leads to Bray Exoscience and its subzones, Eventide Ruins which lead to Riis-Reborn Approach and its subzones, and Asterion Abyss which leads to Nexus and Well of Infinitude. The campsite in Beyond allows players to store certain trophies obtained by completing specific Europa Triumphs. The Exo Stranger stays near the campsite, she handles the Stasis quests. Variks the Loyal resides in Charon's Crossing, he is the main vendor of this destination.

Savathûn's Throne World, also known as Court of Savathûn, Throne World, is a destination introduced in The Witch Queen. It is inhabited by Lucent Hive and Scorn enemies. The Throne World patrol area can be accessed by players who complete the mission The Investigation from the Witch Queen campaign.

The Enclave is an instanced location on Mars. It was introduced in The Witch Queen and serves as a key location during the Witch Queen campaign. Its landing zone icon can be found on the left-hand side of the Savathûn's Throne World destination map in the Director. The Enclave is also where the Weapon Crafting area is located.

Eternity is a destination added for the Bungie 30th Anniversary Event. It can be found on the Destinations map in the Director. It is located in Unknown Space, and is associated with the Nine.