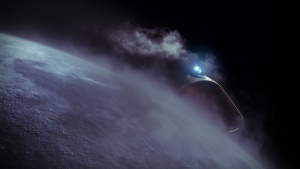 The Derelict Leviathan, orbiting the Moon.

The transfigured remains of Calus's Leviathan.

The Derelict Leviathan is a destination introduced during the Season of the Haunted.

It is the Leviathan, the flagship of Calus, former emperor of the Cabal. When Destiny 2 launched, it orbited Nessus. It later disappeared after the release of Beyond Light. It now orbits the Moon, and is infested with egregore, a Darkness-infused plant-like organism, previously seen in the Presage mission.

The Derelict Leviathan becomes accessible after completion of the Operation: Midas introductory story mission. Players will then acquire the Nightmare Harvester Seasonal Artifact and The Leviathan Returns quest from the Crown of Sorrow in the H.E.L.M.

Choosing "Castellum" does not prevent players from initiating the Nightmare Containment activity, but "Containment" will make it easier to find other players who want to participate in the event. The landing zone has a recommended Power Level of 1580, but players will have their Power Level temporarily raised to 1570 when arriving at the Leviathan.