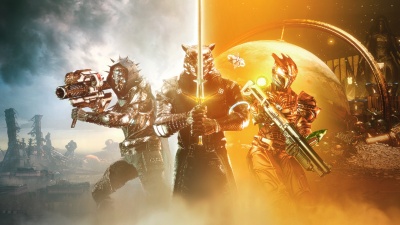 The Bungie 30th Anniversary Event is a special event commemorating Bungie's 30th Anniversary as a company. The event was released during the Season of the Lost, alongside Version 3.4.0[1], on December 7, 2021. An end date was never confirmed, with most content from the event remaining available after the Season ended on February 22, 2022.

Celebrate three decades of gaming with an event that pays homage to the adventures we've shared. We can think of no better way to mark the occasion than by continuing our journey together. Bring Bungie’s legacy of adventure into the present day, with new weapons and armor inspired by our past.[2]

The event adds a new 6-player game mode, Dares of Eternity, which is free for all players. Guardians fight enemies in a game show-themed offensive, hosted by the Starhorse, with Xûr acting as a translator. Dares of Eternity rewards can be redeemed in the new social space, Xûr's Treasure Hoard. Treasure Keys can be used to open a chest that gives exclusive weapons, while Strange Coins can be used to buy bounties and other items from Starhorse. Players can earn the Forerunner Exotic Sidearm, and its catalyst, by increasing Strange Favor rank with Xûr through Dares of Eternity.

The event launch also included the Moments of Triumph 2021 triumph seal, which allowed players to complete triumphs from the past year to earn cosmetic rewards, as well as the MMXXI title. It was available until the launch of The Witch Queen on February 22, 2022.

In addition to the free content, the Bungie 30th Anniversary Pack was released. This paid DLC grants access to the Grasp of Avarice dungeon, which is inspired by the "Loot Cave" in the Cosmodrome, from Destiny. Its rewards include several re-released weapons from Destiny, as well as a Thorn-themed armor set for each class. The pack gives access to an Exotic quest to earn the Exotic Rocket Launcher, Gjallarhorn. The Gjallarhorn Catalyst can be obtained by completing certain tasks in the Grasp of Avarice dungeon. The pack also includes a number of cosmetic items, with some that must be earned through Dares of Eternity or by completing triumphs.