Thorn is an Exotic Hand Cannon.

"The Weapons of Sorrow are not the endgame, but a road map. Each evolution, every advance in the delivery of pain and the mastery of destruction feeds the Hive's hateful weapons research. They will map every scream, harness every aggression, until they understand every method by which to ravage the hearts, minds, and flesh of man. And in doing so, they will turn us against ourselves—feeding our lust, our greed, our fear, until we become a threat unto ourselves like none we could imagine. So, wield these, angry reaper. Strive to know the darkness in your own heart. Walk in the shadows of fallen heroes. And know that you are an enemy of hope." 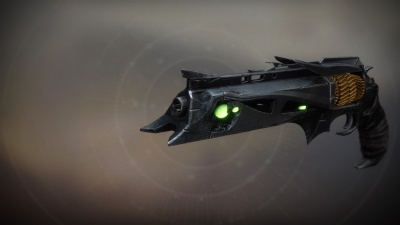 
Do Not Sell My Personal Information
Retrieved from "https://d2.destinygamewiki.com/mediawiki/index.php?title=Thorn&oldid=86822"
Categories: