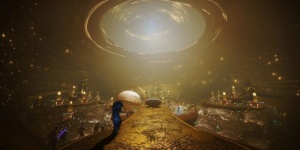 Xûr's Treasure Hoard is a destination in Eternity, introduced with the Bungie 30th Anniversary Event.

The Treasure Hoard can be found in Eternity, and is accessed through the Destinations menu in the Director. Players can acquire quests, bounties, and rewards from Xûr and the Starhorse.

Strange Coins, earned through Dares of Eternity, can be used to purchase various items and bounties from Starhorse.

Treasure Keys can be used to open various chests in the treasure room.

The white chest near Xûr can be opened with 1

Treasure Key, rewarding a 30th Anniversary weapon. The possible weapons that can be obtained from this chest include:

The treasure room contains many golden chests that reward cosmetic items. Ownership of the Bungie 30th Anniversary Pack is required to open these chests. They also require the player to reach a certain level of Strange Favor rank with Xûr, and cost a certain number of

Treasure Keys to open. The hologram floating above a chest will indicate its contents. The chests contain a set of armor ornaments for each class inspired by Bungie's Marathon games, as well as a Ghost Shell, Sparrow, and Ship. One chest rewards the Celebration Weapon Mod consumable

Sweaty Confetti, and can be opened repeatedly to obtain additional copies.

Each class has its own set of five chests, placed in a corner of the room next to a statue of that class. The chests do not need to be opened by a character belonging to that class.