Detailed explanation on how to acquire Survivor's Epitaph

"A weapon hides nothing. It is what it is. Whether it wants to be or not." —Saint-14 to Shaxx

To be the first Eliksni to bask in the presence of the Traveler since the Whirlwind was an honor that Mithrax, Kell of House Light, never imagined for himself. As he stood on the Tower walkway below the scar left in the wake of the Almighty, he meditated on the choices in his life that had led to this point. He wondered if there was a unifying thread binding all those events together. But he would have no time to ponder such things.

A shadow crept over Mithrax: broad shoulders, a curling horn. Seeing the stark outline of Lord Shaxx looming on the stairs elicited centuries-old instincts, and it was temperance that kept Mithrax's hands from his weapon.

"I didn't expect to actually find you here," Shaxx said as he continued down the stairs with slow, plodding steps. "Were you there?"

Shaxx came to stand beside Mithrax at the railing. "Were you there?" he asked again. This time, he pointed, without looking, to a place on the horizon beyond the Traveler.

Mithrax followed Shaxx's gesture with his eyes. He did not understand.

"The Battle of Six Fronts," Shaxx insisted, with uncharacteristic softness. "Do you know how many Fallen I killed there?"

Mithrax bristled at the question, and he felt that instinctual urge to reach for his weapons again. But the presence of the Traveler and the question that nagged at the back of his mind stayed his hands. "How many?" he asked, not wanting to know the answer.

Shaxx deflated, folded his arms over the railing, and rested his considerable weight against it. "Hundreds," he said quietly. "All of them died afraid."

Mithrax felt Ether mixing with bile in the back of his throat. His limbs trembled, rage burned in his gut, demanding manifestation. But he tempered his anger, sighed so deep that the Ether on his breath was briefly visible as an iridescent cloud.

"How many Humans have you killed?" Shaxx wondered.

"Too many," Mithrax answered, and even that felt insufficient on his tongue; the thought of it twisted his insides around. He sighed again, deeper this time, and Shaxx watched the sublimated Ether glitter in the dim light.

"When I heard you were in the Tower," Shaxx said, "I thought I'd just throw you over the edge of the wall. I thought about the people I watched die at the hands of your Houses over the years. The Lightless torn limb from limb during the Dark Age." He snorted out a rueful laugh. "Then I started to think about them."

Silence hung in the air for a moment, long enough for Mithrax to ask: "Who?"

"Three scavengers. Huddled together in a collapsed storm drain. They had stolen food during a… a time of famine. Maybe it was for themselves, maybe another settlement, maybe family…" Shaxx shrugged. "I killed them. All three, with my bare hands."

"My victims were Humans too," Shaxx clarified, and the Kell felt his anger twist into confusion. "I was a Warlord in the Dark Ages. Convinced myself of the necessity of my own barbarism by painting it with noble colors. Those loyal to me built a legend that masked the blood and the rot. But it's still there." He tapped his fingers against his breastplate. "Deep down."

The shadows had become long, stars now visible in the sky, and the Traveler was cast in half shadow.

"There was a ship," Mithrax eventually replied. "It may have been soldiers. Civilians. I do not know." He looked away from the Traveler as he spoke. "I led a boarding party onto it. We slaughtered any who resisted and rounded up those who surrendered."

Shaxx turned to look at Mithrax, a wordless question in his faceless mask.

"We argued what to do with the prisoners. Some suggested we keep them as warning-trophies. Others said to barter with them." Mithrax looked away, shoulders sagged. "But I was young. Impatient." He closed his eyes. "I opened the airlock. It seemed the simplest solution."

Both soldiers sank into silence again and remained so as the last glimpse of sunlight descended beyond the horizon. Shaxx sullenly took his leave, and Mithrax was left with the remnants of anger and confusion, and paradoxically—an answer.

He saw then the thread of choices leading to this moment. The choices that led to the Great Machine and away from a fate like Eramis had suffered. It was something both he and Shaxx learned to accept in spite of a lifetime of experience telling them otherwise. 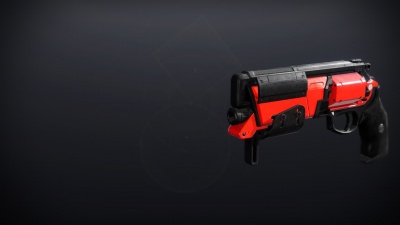