From Destiny 2 Wiki
Jump to: navigation, search
Antiope-D is a Year 1 Legendary Submachine Gun which was re-implemented as a Year 2 weapon.

Detailed explanation on how to acquire Antiope-D

The range of this SMG, combined with kill clip are the main reasons to use it. This SMG seems to be able to maintain damage output and possibly more importantly - crosshair stickiness at a considerably farther distance than most other SMGs. As a result, it has quite a bit of versatility, being more flexible than most, and you won't have to worry about your effective range as much as with other SMGs. Antiope-D has 58 aim assist, the highest of nearly all SMGs, only beat out by Mida Mini Tool by 1 point. This lends to the overall ease of use when shooting with the gun, assists in compensating for the recoil, and as I mentioned, maintaining aim assist at range.

Antiope-D begins to see damage dropoff at 27m, maintaining full damage for 26m. Damage begins to drop more drastically after 29-30m. 23m seems to be the most optimal range, aim assist is strong and damage falloff isn't something to worry about. Aim assist also seems to begin dropping off more drastically at around 29ish meters.

Stability wise, this gun isn't bad, its got mainly vertical recoil, which is easy to anticipate and control for the most part, but because of its low stability it has a noticeable amount of crosshair climb when holding the trigger and firing continuously. I did notice, as with many SMGs, that this weapon also has some jerks in the direction of its recoil - so overall, this weapons recoil might take some getting used to, but isn't too difficult to master. It's got 90 recoil direction, and for the most part like I mentioned its entirely vertical recoil and pretty easy to control, so although its stability stat itself isn't amazing, between the aim assist and recoil direction, it shouldn't be too hard to learn to compensate for the recoil. I found that using 1 mod was somewhat useful with the weapon, but certainly not 2. Even with 1 mod, usefulness was miniscule, but somewhat noticeable, so I suppose it could be useful.

Handling and reload speed statistically aren't great for this weapon, but I haven't really noticed much of an issue with either. I feel that for the sake of balancing, its expected that this weapon wouldn't have a great reload speed, but again it didn't feel that bad. Using gunslinger's chain of woe, or perhaps a kinetic munition loader mod could improve the weapons performance and save you time when activating kill clip. This weapon also has a relatively small mag, which also makes sense given its potential damage output. Running out of ammo will be something you'll want to be aware of, furthermore making a reload mod something I could certainly recommend. 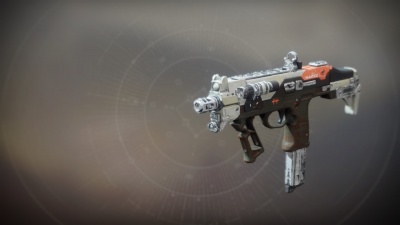