Destiny 2 includes RPG-Like elements in the form of Armor and Weapon Stats. Each stat serves a unique and quantifiable purpose.

Armor has 6 stats associated with it. Each armor stat modifies a guardian's intrinsic traits and boosts their cooldown.

All armor stats provide benefits in tiers, capping at tier 10. Armor stat Tier can be calculated with the following equation:

All armor drops with pseudorandom rolls on the 6 armor stats. Stat are rolled and distributed with regards to 2 stat groups.

Each stat group has 2 sockets for premade armor stat roll plugs.[1] Plugs are rolled from a collection of plugs for each stat group.

Each plug is worth 11-17 stat points, with the exception of a single plug worth 20 stat points. This means that most armor rolls have anywhere between 22-34 points per stat group. If both stat groups have two 17-stat plugs, the armor will have a base stat total of 68. A base stat total greater than 68 is only achievable with the singular 20-stat plug.

A weapon's attributes are expressed in stats, not all stats are used on a given weapon. Intrinsic Weapon Perks such as Adaptive Frame and Aggressive Frame will affect the influence of these stats.

Most weapons have these stats available to them.

Grenade Launchers and Rocket Launchers have some stats unique to them related to their explosive rounds.

Swords have stats unique to them since they have fundamentally different mechanics from guns.

These Attributes no longer appear in game or seem to have no bearing on gameplay anymore.

In the above example, displayInterpolation is an interpolation function. This function is responsible for generating stat values in game from the hidden layer stats. Value corresponds to the hidden layer and weight corresponds to the presentation layer. value-weight pairs that do not exist are inferred mathematically using surrounding data points.

This is a common scenario and a common interpolation function that occurs for not just range, but for many other stats for many other weapon families. This is why a perk like Accurized Rounds gives +9 Range despite it having a value of +10 range. 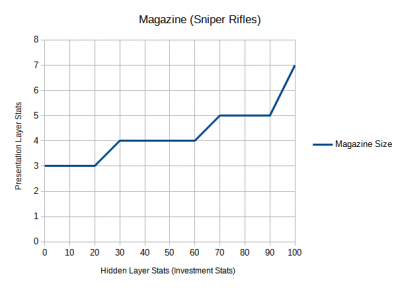 Some Interpolation Functions are nonlinear. When investing into stats that have nonlinear interpolation functions, a guardian should take note of plateaus and sudden spikes

Example:
Sniper Rifles have a very nonlinear approach to their Magazine stat. The following is the interpolation function for Magazine for all sniper rifles.

Notably, there are plateaus where heavy investment into the Magazine stat would result in literally 0 benefit, while other areas give a large boost to magazine size.

Example 2:
Consider IKELOS SR v1.0.2 with Tactical Mag. In this case, the Ikelos Sniper has a hidden layer Magazine stat value of 90. With Tactical Mag's +10 Magazine, this brings it to 100 Magazine which is the cap. This means that Tactical Mag is strictly better than Appended Mag and Extended Mag for this sniper. Also worthy of note, this example shows how a nonlinear interpolation function can cause huge jumps in value from small buffs.