Fill my wounds with molten gold and make me whole again.

Pale whisps of clouds swirl over pine trees the color of blackened emerald. No birds sing here; only the cold wind whistles through the tree branches. Flares of atomic fire bloom in the woods and lick against smoldering bark. There is poison in the ground, violence in the air. Screams, both human and inhuman, erupt and echo out into the gloom.

Two dozen Hive Thrall erupt from the mouth of a cave, shimmering and opalescent like mollusk corpses. They scramble through the dark, shrieking cries of death and birth. Shayura stands, sword of fire held fast, screaming against the crashing tide of chitin and bone.

Burning embers of Thrall rain around her, but with each dispatched wave of necrotic soldiers, their numbers seem to double. They press forward, inching her closer and closer to the crumbling ravine. Shayura knows that the only way out is through. Wings of flame roar off her back, leaving a trail of rippling heat and charred Thrall in her wake.

The Thrall finally recede, but the towering Knight that strides through their parted ranks is an escalation, not a victory. Her sword clashes with the Knight's shield, shattering it in a single blow before tearing through the Knight's arm and sinking her blade into its chest.

She can feel her Light ebbing and wastes no time splitting the Knight in half and separating head from body. Shayura exhales with relief, but with her next breath comes a blinding flash of light. It manifests above the Knight. Her vision swims, her mind reels; the shape is at once familiar and alien—a Ghost. Shayura sees the Hive Knight reborn, reconstructed, as a Guardian would be.

She has been here before. But not like this.

Deep panic builds in her chest. This is no Hive death ritual; this is not Titan. She runs from the Knight's next swing and slips into the reach of Thrall that tear at her armor. Mustering the last of her Solar energy, Shayura calls up a cyclonic pillar of flame that twists up into the sky and consumes the Knight.

The revenant Knight collapses in the flames, and its Ghost manifests again. Shayura leaps forward and drives her sword through, pinning the screaming Ghost to the forest floor. Her Solar aura flickers and fades; smoke and steam billow from her back and shoulders.

Shayura's breath catches, her mind jostled. She feels the soft grass beneath her and sees the flower-dappled park that surrounds her, all sitting beneath the shadow of the Traveler in the heart of the City. Her SMG lies on the ground at her side. Tears shine below exhausted eyes, dark hair in a tangle matted to her head.

Aisha kneels in front of her friend as one might before a wild animal. Reed-7 stands at her back in abject silence, hand over his mouth. City security fans out behind him, their weapons trained on Shayura.

"Shay?" Aisha pleads this time. She gingerly places her hands on Shayura's cheeks and looks into her eyes, searching for a sign of recognition. Shayura eventually reaches up and touches one of Aisha's hands. She tries to talk, but her words are merely whimpers.

Aisha wraps her arms around Shayura's shoulders and pulls her into an embrace. "It's going to be okay," Aisha whispers into Shayura's hair.

"We're going to get you help," Aisha promises.

Shayura does not trust herself or the world she thought she knew. Light is Dark, Dark is Light. The lines have blurred beyond recognition.

But at least in surrender, there is peace. 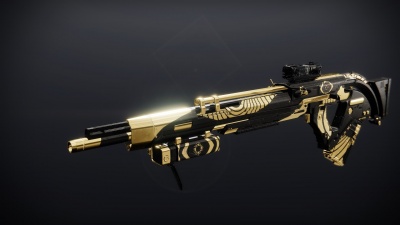