From Destiny 2 Wiki
Jump to: navigation, search
"??s" is not a number.

Detailed explanation on how to acquire Tarantula

No one will escape my web.

"You can't be serious, Arrha. Nothing? You couldn't even scrape off a little stone to bring me?"

Arrha shook his head. "The Spider asked for information," he answered in Eliksni, "But Cabal have found nothing, and House Salvation is still scattered."

"I know what I asked for. And you know better than to return to me empty-handed. At least I thought you knew." Spider narrowed his eyes at his trembling Associate.

"I do, the Spider. I… I have information, but not about Darkness. I saw the Crow. Tailing the Golem and his crew."

"The Vanguard has him sniffing around Basilius, hm? So we do have something to trade with the empress after all. Not that it'll do her any good; my little bird is devilishly hard to catch." Spider leaned forward. "Now HE would've gotten me something useful from Europa. You might've learned from him."

"Yes, the Spider." Arrha nodded vigorously. The faint sounds of revelry drifted in from down the hall, where the other Associates were enjoying their week's earnings.

"Avrok already told me about Crow's new assignment as Vanguard agent. Apparently, he's placed quite the wager on one of the Cabal's silly Rites ," the Spider chuckled. "Avrok should've dared him to bet his freedom. Could stand to win my whole trove, he's that valuable."

"Yes, the Spider," Arrha repeated. Out of corner of his eye, he could see his share of Ether waiting in the corner.

"Oh, take your wages and go. I ought to dock you for bringing me nothing, but I'm feeling generous this week." Spider's voice dropped into a growl. "Remember that I am good to you, Arrha."

Arrha nodded as he scrambled to grab his Ether tanks and get out. Finally alone, the Spider sat back in his throne.

"It's Crow, really, that needs the reminder," he mused aloud. "I wonder how I might give it to him?" 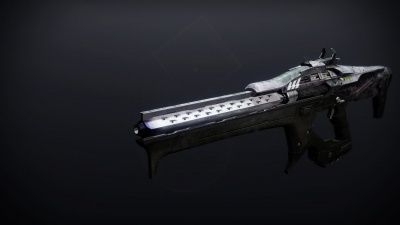 
Do Not Sell My Personal Information
Retrieved from "https://d2.destinygamewiki.com/mediawiki/index.php?title=Tarantula&oldid=91548"
Categories: