Detailed explanation on how to acquire Extraordinary Rendition

"My warriors fight not for themselves, or even me, but for each other." —Empress Caiatl

My friend and first, I know Her Royal Tuskiness is not my assignment, but I couldn't help but catch the following exchange on my latest trip to you-know-where. If anything, it's good for a laugh. Don't let our favorite Praxic wear you down to a nub. If she gives you grief, you give her a swift kick from me. —C.Y.

[A.T.] The connection is made. Let the imperial record show that, on this day, the great Empress Caiatl, ascendant of Calus, slayer of Umun'arath, convened via radio message with the Spider of the Tangled Shore, formerly of the House of—

[E.C.] Enough, Taurun. The scribes can add whatever flourishes they wish after the fact.

[T.S.] Yes, let's not waste time. I know you have more important matters to attend to. Matters that I would be happy to help with… in my own small way.

[E.C.] I would no sooner seek aid from you than a war beast would from a bog-tick. Do you know how many thieves I've had to excise from my ranks? They debased themselves. Crawling about our proving grounds. Refashioning battle-trash into weapons. All because you tempted them with a flash of Glimmer.

[E.C.] This is not my first time dealing with war profiteers, insect. Though, if I squash you thoroughly enough, it may be my last.

[T.S.] And here I thought I was doing you a charity, promoting Cabal entrepreneurship. I was told the empire was low on funds.

[T.S.] Your Majesty, I don't know what advice you've been getting from your imperial hangers-on, but—

[T.S.] But things are different here in the Sol system. Smash and conquer—like so many traditions of old Torobatl—won't get you far. Ghaul found that out the hard way. The remnants of his Red Legion have learned to adapt.

[T.S.] Let me know if you'd like to do the same. I'd even go against my own custom and consider a payment plan.

[E.C.] How generous. But it seems I have no need. As you've revealed, I have untapped resources at my disposal.

[T.S.] Whichever ones have survived your purge, yes. But weapons are not my most valuable wares, not by a long shot. If you're anything like your father, you'll be far more interested in the information I have to offer.

[E.C.] Send your coordinates. We can discuss face-to-face. But tread lightly. I've yet to decide whether you're worth my mercy.

[T.S.] Oh, I'm honored to host Her Imperial Highness on my humble Shore. It's no palatial estate, but we insects are just happy to have a place to call home. 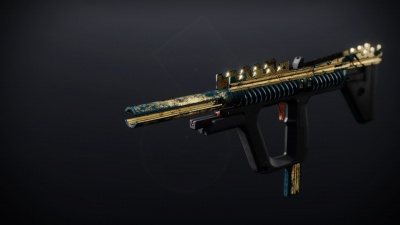