Whisper of the Worm

Whisper of the Worm is an Exotic Sniper Rifle.

Xol, the Will of Thousands, perished but was not destroyed. Death is a road, death is metamorphosis, the unsacred union between destroyer and destroyed. The might which defeats a god is also the ambrosia that god craves, the meat-sweet logic of Existence-Asserted-By-Violence, the binomial decision between two ways of being which deny each other. In dying, Xol fed richly.

Now came Xol unto the Taken upon Io, who fed Xol with plunder and tried to make of it an idol and a commanding will. Yet Xol was bound joyously to the very logic that sustained it in its death. It wanted the sword proof, the single proof. It wanted to become a rule which divided the mighty living from the mighty dead. So it whispered the Anthem Anatheme, the temptation to dominate the objective universe with the subjective will. It said, I shall be an engine to make your desire hegemon over your conditions. It said, WIELD ME, AND USE ME TO TEST YOUR FOE. This was its worship. Aiat. 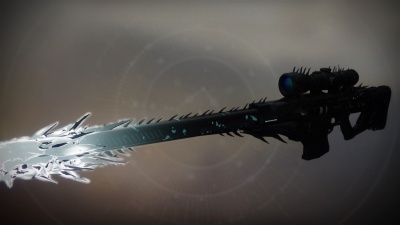 Do Not Sell My Personal Information
Retrieved from "https://d2.destinygamewiki.com/mediawiki/index.php?title=Whisper_of_the_Worm&oldid=73420"
Categories: